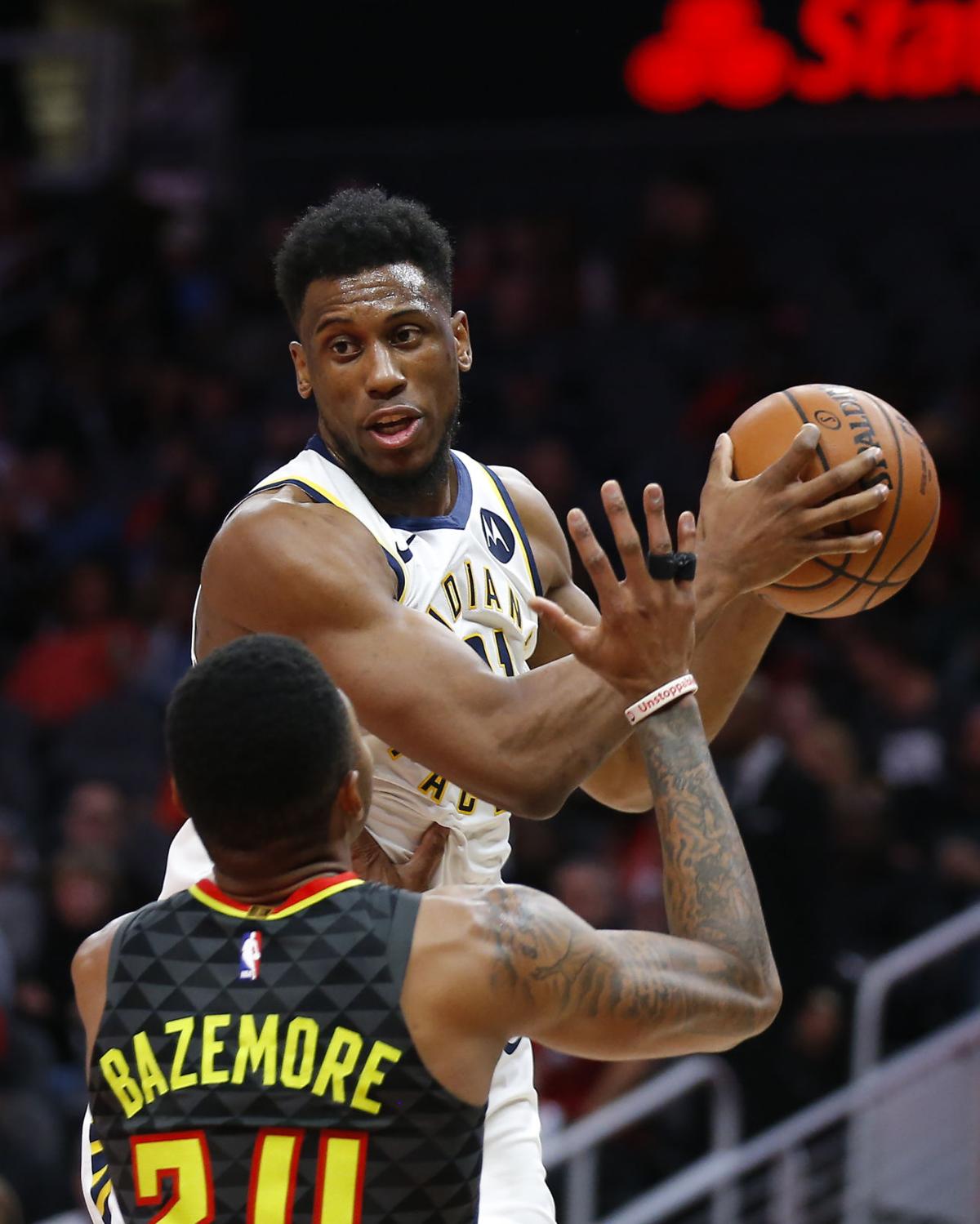 ON THE ROAD: Indiana forward Thaddeus Young looks to operate against Atlanta guard Kent Bazemore during the Pacers' 129-121 victory Wednesday night at Atlanta. Indiana improved to 11-7 in road games.

ON THE ROAD: Indiana forward Thaddeus Young looks to operate against Atlanta guard Kent Bazemore during the Pacers' 129-121 victory Wednesday night at Atlanta. Indiana improved to 11-7 in road games.

There is a lot going right for the Indiana Pacers at the moment. Following their 129-121 win over the Atlanta Hawks on Wednesday, the Pacers have a 23-12 overall record. They are tied with the Milwaukee Bucks for the third-best record in the NBA.

There are a few main traits that usually separate great teams from just the good ones. Usually those traits include being elite on at least one end of the floor and being able to win on the road and against teams with losing records. The Pacers are checking each of those boxes.

While they allowed the Hawks to score 121 points, it doesn’t take away the fact that they have produced elite results on defense this season. They are producing a 102.4 defensive rating and that trails only the Oklahoma City Thunder. They did lead the league in this category prior to their matchup with Atlanta.

The Pacers may not lead the league in defensive rating anymore, but they still are at the top in a few categories. At the moment, they are holding their opponents to score a league-best 101.1 points per game and only 0.925 points per possession.

What’s interesting is the fact that the Pacers are getting the job done defensively without an elite on-ball defender like Paul George or Kawhi Leonard. They have been led by their defensive anchor Myles Turner and the versatility of Thaddeus Young at the four spot. Pacers assistant coach Dan Burke credits the players for buying in.

"They're good team defenders," Burke said. "A couple of them said, 'Look, I'm not a good one-on-one defender.' I said, 'You don't have to be. Be a great team defender.'

Bojan Bogdanovic is one of those "good team defenders" who does not possess elite athletic ability but manages to make an impact. He credits the fact that Burke prepares them well for their matchups throughout the season so they are able to get to the right spots with greater consistency.

"He is just straight and honest with all of us,” Bogdanovic said about Burke. “We are watching a lot of video before and after games, trying to know the tendencies of players we are guarding ... that is the biggest thing."

There was an example of the Pacers making defensive adjustments at halftime against the Hawks. They were getting beaten in the pick-and-roll throughout the first half but they talked it over with each other before they went back onto the floor for the rest of the game.

"We came in the locker room at the half and talked about it,” Tyreke Evans said. “Everybody was talking about what we needed to do to stop the pick-and-roll because they were getting 3s and dunks, so we just dialed in and locked in to figure out ball pressure and make things hard for them."

A few key areas have contributed to the success that the Pacers have experienced. It starts with the fact that they are now 17-3 against teams with losing records. No team in the NBA currently has as many wins against such opponents as Indiana does. Managing to win the games that you are supposed to win is important and they have done exactly that.

Some teams play down to their competition and aren’t engaged on a nightly basis. That’s not the case for this Pacers team. They bring it on a nightly basis and have the depth to overcome struggling performances from key players. That is a real formula for success against losing teams.

A common theme that the Hawks mentioned about the Pacers after their matchup was that they are a good team that takes advantage of the mistakes of their opposition. Whether those mistakes include late defensive rotations or turnovers, they widen the margin for error required to win games. Having depth to take advantage of those mistakes has been critical.

"They're a good team,” Hawks guard Kent Bazemore said. “Like I said before the game, well-coached, they play hard, they play together. Coach said after the game that any mistake we made defensively, they took advantage of it. That's what good teams do in this league."

The Pacers have more scoring depth on their roster than they have had in years and it plays a key role in their success. They had eight players score in double-figures against the Hawks and it was important because Victor Oladipo had an inefficient 16 points, Bogdanovic struggled from deep and Turner got into foul trouble early in the game.

It helps that the Pacers have been moving the ball better lately and they have found real success when they do that. They had an impressive 35 assists against the Hawks and have averaged 26.9 assists in December. Indiana has a 14-3 record on the season when they record at least 25 assists.

"When guys are open you have to get them the ball,” Nate McMillan said. “You shoot a better percentage when you move the ball and you have your feet set and that's what we continue to express to our guys. It was just good ball movement [Wednesday]. Some of our guys finally found their rhythm [Wednesday] with that ball movement and it's tough to guard when you are moving the ball like that."

These traits that the Pacers have shown have been a key contributor to their 11-7 road record and their 12-3 record in December. As things currently stand, only the Toronto Raptors have more wins on the road but Indiana currently leads the league in wins so far this month.

The next step for this Pacers team will be to improve their 6-9 record against teams with a winning record.