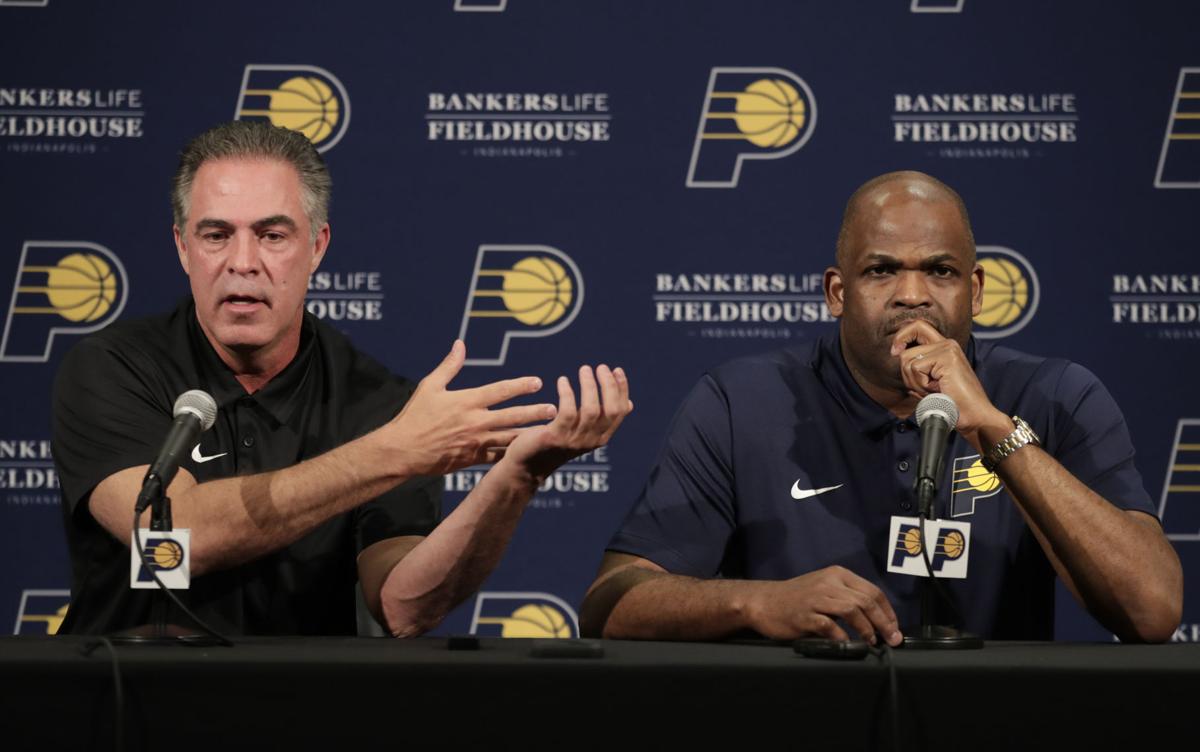 BLUE AND GOLD: Indiana Pacers general manager Kevin Pritchard, left, and coach Nate McMillan are shown during the team's end-of-season press conference on May 1 in Indianapolis.

BLUE AND GOLD: Indiana Pacers general manager Kevin Pritchard, left, and coach Nate McMillan are shown during the team's end-of-season press conference on May 1 in Indianapolis.

Editor's note: This article has been edited to clarify the list of restricted free agents.

After an overachieving season that ended in taking LeBron James and the Cleveland Cavaliers to the brink of elimination, the Indiana Pacers have an intriguing off-season ahead of themselves.

The priority for the Pacers will be to continue to add pieces around Victor Oladipo to take the next step as a team. He will play a role in the decision making process, as general manager Kevin Pritchard noted during his interview with Dan Dakich of 1070 The Fan.

There are a few ways the Pacers can approach this summer and that basically comes down to a conservative approach where they practically keep their roster intact for another year, or an aggressive approach where they go all-in on another star player in a trade or through free agency. Pritchard discussed these main options at the team’s end-of-season press conference.

“We’re looking at all the options," he said.

“Do we go big-game fishing this summer, [which] will cause us to lose some of the players we have here? Or do we keep this basic team together, maybe add a few peripheral pieces, [and then] have $50-70 million in cap space the following year?

“There are times you have to shove the chips in and say, ‘Let’s do it.’ In my mind, over the next couple of weeks, that will be the precipice of what I’m thinking about. Is it time for us to get aggressive and add that player or players or do we keep these really good human beings, really good players who know their role, and let Myles [Turner] and Domas [Sabonis] and Victor be the shining lights that have to improve?”

What do the Pacers have to work with? They can create up to $51.4 million in cap space, they have the very team friendly contracts of Darren Collison and Bojan Bogdanovic to use as trade chips, and they have the 23rd and 50th picks in this year’s NBA Draft. Let’s not forget that they have talents like Oladipo and Turner to recruit talent, too.

The top of the free agent market does not feature a lot of realistic options. The top free agents include James, Kevin Durant, Paul George, Chris Paul, DeMarcus Cousins, Clint Capela and DeAndre Jordan. They definitely do not need a center, Durant and Paul are almost certainly not leaving their teams, and the reported list of teams that James is considering does not include Indiana.

The Pacers are definitely in need of a more dynamic small forward who can be a secondary offensive options and guard the opposing team’s best perimeter player, so it would make a lot of basketball sense to sign George. This was also a topic from Dakich’s interview with Pritchard.

As mentioned in the team’s end-of-season press conference, Indiana could go the trade route to add a star player because many teams are facing a looming financial crisis and could be cornered into trading key players to right the ship. While the particular options remain unknown, things will be clearer closer to the time of the NBA Draft.

“The trade market could be better than ever,” Pritchard said. “There’s not many teams with cap space this summer and when that happens normally teams get aggressive with trades to change their team. How aggressive we’ll be, I don’t know yet.”

There are some internal things that will need to be watched, too. Thaddeus Young has to make a decision on his $13.8 million player-option and they will have to decide if they want to re-sign Glenn Robinson III, who is set to hit unrestricted free agency this summer. Cory Joseph already has committed to exercising his player-option and Lance Stephenson and Joe Young both have team options that the Pacers must make decisions about.

Indiana has the option of keeping its team intact as much as it can to preserve its great salary cap flexibility for next summer. It has its whole playoff rotation under contract with the exception of Trevor Booker and Young still has to decide on his player-option. Other than that, it could use an approach of just temporarily plugging in the holes if any are left.

It goes beyond roster moves for the Pacers, though. The development of Turner will be very important and he is also eligible to negotiate a contract extension. Turner is the biggest variable on the roster in terms of potential for improvement, but other players like Sabonis and T.J. Leaf as well as even Oladipo have further room for growth. too.