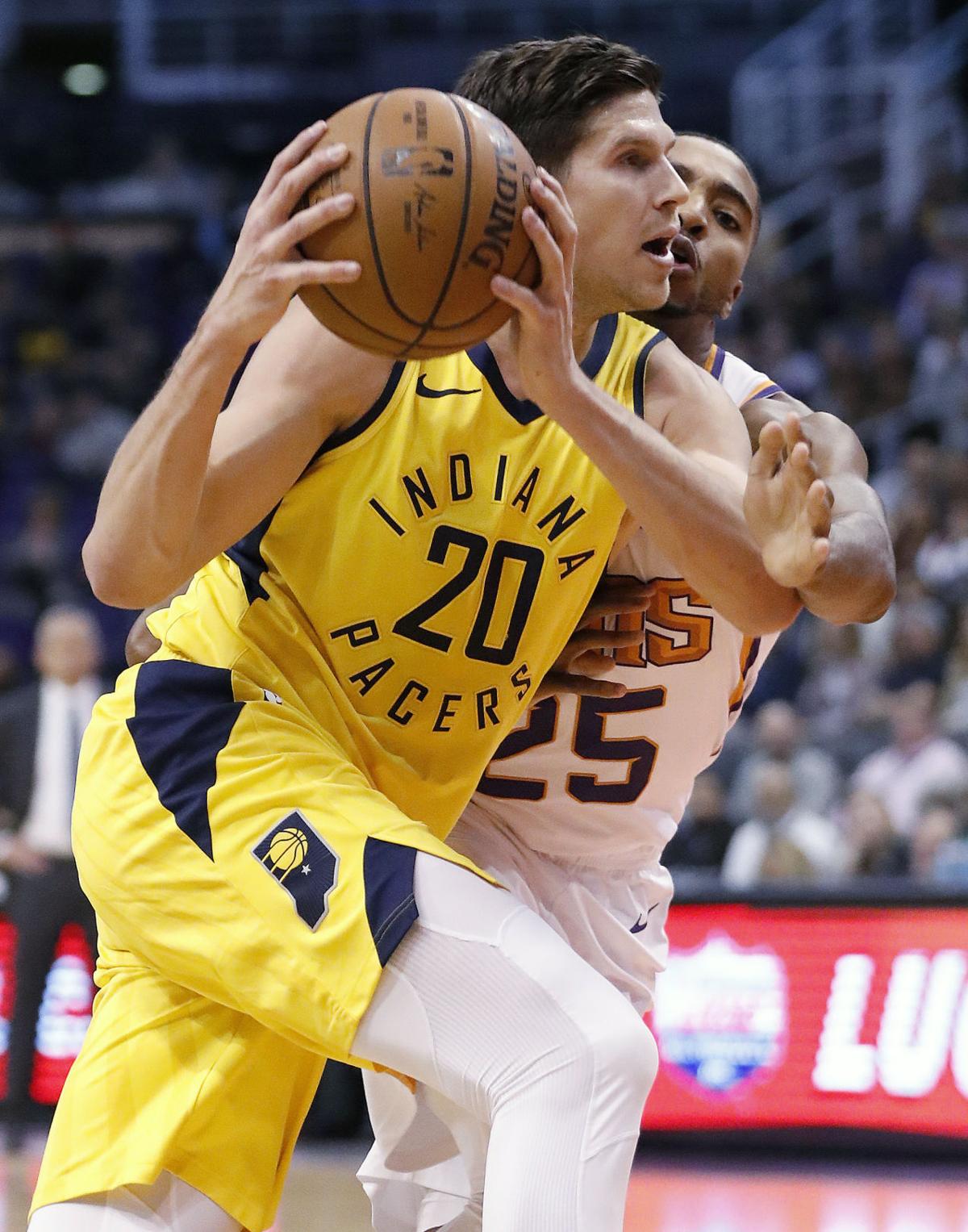 KEY RESERVE: Indiana forward Doug McDermott drives against Phoenix forward Mikal Bridges during the first half of the Pacers' 109-104 victory over the Suns on Tuesday at Phoenix.

KEY RESERVE: Indiana forward Doug McDermott drives against Phoenix forward Mikal Bridges during the first half of the Pacers' 109-104 victory over the Suns on Tuesday at Phoenix.

The Indiana Pacers are halfway through a West Coast road trip and are off to a 2-0 start. Their first win came against the Utah Jazz on Monday and then against the Phoenix Suns on the second night of a back-to-back.

While the Jazz and Suns are both teams that are at the bottom of the Western Conference standings, there is significance to those wins. It starts with the fact that both victories came without franchise cornerstone Victor Oladipo.

Perhaps the biggest fault on last year’s Pacers team was their inability to succeed consistently when Oladipo wasn’t on the floor. They went 0-7 last season in the games that he didn’t play and, in general, they produced just a negative-8.2 net rating when he was off the floor. There was an incredible 14.2 difference between the team’s on- and off-court net ratings.

It has been different for Indiana so far this season. The Pacers currently have a 3-2 record when Oladipo doesn’t log a single minute. However, if the game against the Atlanta Hawks on Nov. 17 is included when he played less than five minutes, that record improves to 4-2.

Regardless, they have shown a much greater ability to succeed without their star player compared to last season. Their success without Oladipo hasn’t been limited to just the games that he doesn’t play either. While the team has a 4.3 net rating with him on the court during the 16 games that he has played this season, they actually have a 5.4 net rating when he is on the sidelines in 21 games.

Indiana’s success without their All-Star guard is a testament to the difference in depth that they have on their current edition compared to their previous group. The starting lineup has remained the same and Domantas Sabonis and Cory Joseph are still key contributors for the bench group.

The difference with this season’s Pacers squad is the fact that they signed Tyreke Evans and Doug McDermott during the offseason to bolster their bench unit. While Evans hasn’t been quite as impactful as expected, he has still been upgrade over Lance Stephenson. Also, McDermott has almost already played as many games as Glenn Robinson III did last season.

Last year’s team featured positive on-court net ratings only for the team’s starting five along with Domantas Sabonis and the 152 minutes that Damien Wilkins played.

By having a bench group stocked with positive contributors, the Pacers do not have to try combinations that likely wouldn’t work like last season. Everything can add up throughout the course of a game and cutting out net negative combinations goes a long way.

Another difference for Indiana is that their emergency personnel are more impactful than the options that they had last season. One example of this is Aaron Holiday, who is the first guard to get minutes when there is an injury. He has recorded a team-best 13.5 on-court net rating. Last season, Joe Young recorded a negative-6.7 on-court net rating.

Let’s not forget that the Pacers are deeper at the center position, too. Having Kyle O’Quinn as a third-string center is a real luxury and with Myles Turner and Sabonis each missing a game, the benefits of the addition has already been evident. In fact, the team has recorded a 5.2 net rating with O’Quinn on the floor.

The Pacers mostly use their regular starting five together to open games, close second quarters, begin third quarters, and rarely at all during fourth quarters. Their regular starting group has  struggled badly during opening periods as they have recorded a negative-18.0 net rating in 113 minutes and are comfortably net positive for the rest of games.

It is likely that Indiana will have to face the Los Angeles Lakers at Staples Center on Thursday night without Oladipo. A win isn’t necessarily mandatory considering the circumstances and the success that they have already experienced without their star to begin the road trip. However, it would be genuinely impressive if they pulled off the win.

It will be tough to stop Indiana if they can straighten out the production of their starting unit when Oladipo returns to the lineup. They are a much deeper team than they were a season ago and many of their individual players have been trending in the right direction lately. There are a lot of reasons for positivity surrounding the Pacers right now.