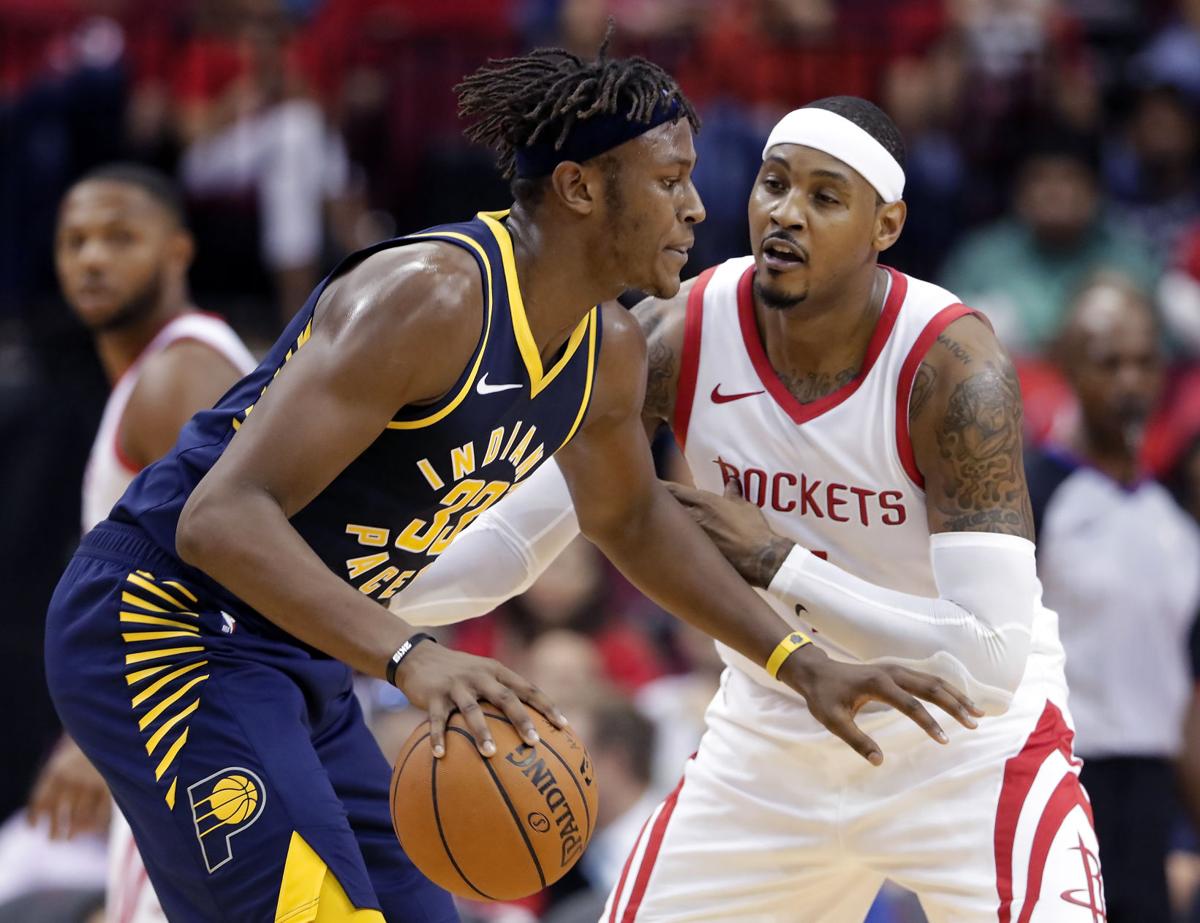 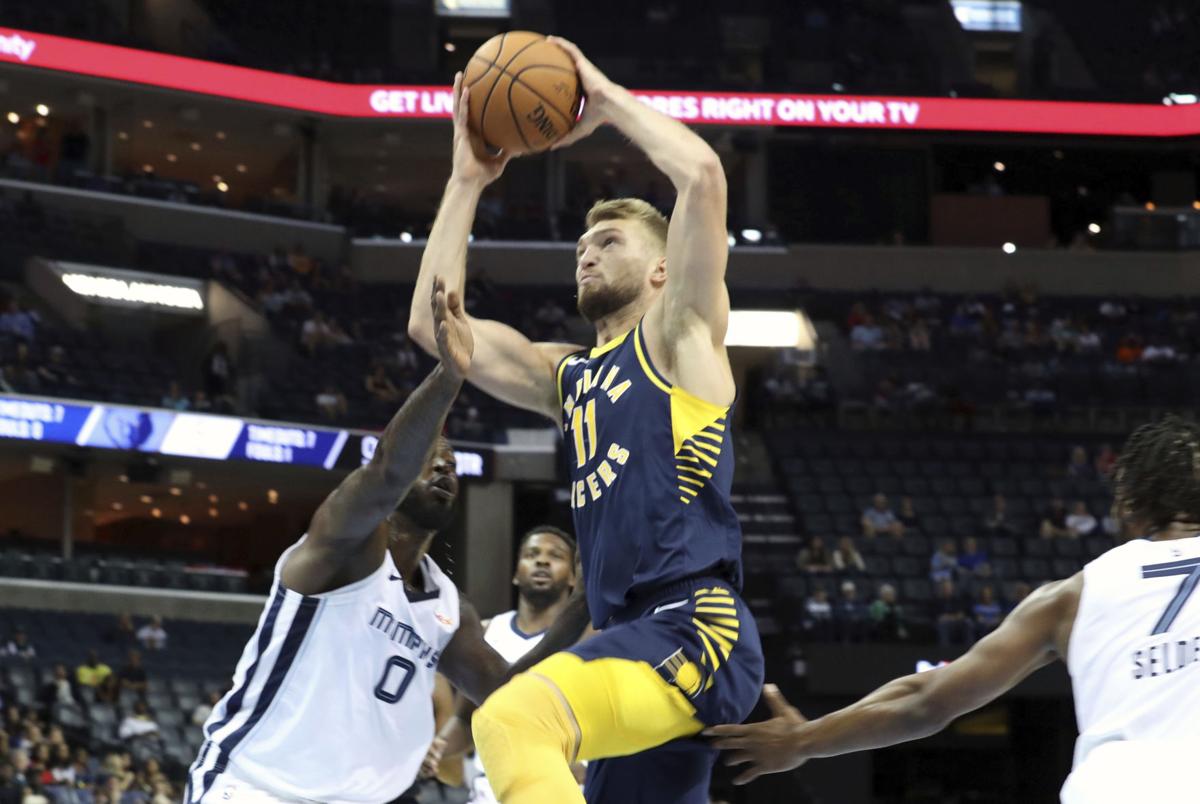 TO THE HOOP: Indiana forward Domantas Sabonis goes up for a shot during a preseason game against the Grizzlies on Oct. 6 in Memphis, Tenn.

TO THE HOOP: Indiana forward Domantas Sabonis goes up for a shot during a preseason game against the Grizzlies on Oct. 6 in Memphis, Tenn.

Last year at this time, the talk about the Indiana Pacers was that they got swindled in the Paul George trade.

The expectations surrounding the team for the upcoming season are far greater than what they were last year.

Not only did they keep almost all of the key players who contributed to a 48-34 season, but they also swapped out Lance Stephenson for Tyreke Evans and added Doug McDermott.

Indiana opens with a home game against Memphis on Wednesday.

The road to 48 wins last season was not a road traveled free of adversity. As a result of injuries throughout the regular season, Indiana's normal starting lineup was able to play in only 44 games together.

While the results of the starting group weren't great as it had just a 2.5 net rating in 696 minutes, the players are healthy and will have continuity together from the start of the season.

It took time for a practically brand-new roster to get acclimated with one another and injuries hurt them too.

More context to consider is that Victor Oladipo and Myles Turner may take a step forward in their development. If either one can manage that, it would go a long way. If they both can do it, then the rest of the Eastern Conference should be scared.

Even if Turner just embraces the challenge of being a dominant defensive anchor that the coaching staff has given him, the Pacers should be improved.

Turner was noticeably more impactful on the defensive end of the floor as last season progressed. Greater results should be expected now that he is in greater shape after the offseason.

The Pacers had an impressive 101.8 defensive rating with him on the floor post-All-Star break. During the playoffs, it improved further to 93.6. The improvement was certainly intriguing.

Now, if the Pacers give Turner more opportunities on the offensive end of the floor and he capitalizes on it, their starting lineup will be in a terrific position.

Turner averaged 12.7 points during the regular season on 9.8 field goal attempts with just a 19.7 percent usage rate. Those are not the figures of a clear-cut secondary offensive option and that will need to change.

There were even fewer opportunities for Turner in the playoffs. He averaged 12.4 points on 7.7 field goal attempts with a 17.3 percent usage rate. For a player who ranked fourth in the NBA in points per possession as a scorer, he should have been involved more.

It will be interesting to see how much involvement the Pacers provide Turner offensively throughout the upcoming season. Will the team's second-highest paid player in 2019-20 be their second-most featured scorer?

The rest of my fascination with the Pacers lies with their bench unit. Anytime you can add a player who averaged 19.4 points, 5.1 rebounds and 5.2 assists per game like Evans, it's going to help.

Evans was one of the league's top off-the-dribble shooters, in general, and was terrific as a scorer in isolation and in the pick-and-roll last season. The improvement by going from Stephenson to Evans is significant.

Domantas Sabonis should continue his progression as a player and be a key component of the second group. Having a playmaker like Evans will help him out significantly.

The rest of the bench unit around Evans and Sabonis features reliable jump shooting from McDermott and T.J. Leaf, as well as a player who is solid at most things within the flow of the game in Cory Joseph.

It will be interesting to see if the defensive results of the bench group can be enough. Having three players like McDermott, Leaf and Sabonis who aren't the most explosive of athletes reduces on-ball and help defensive capabilities.

There is always the hypothetical option that the Pacers go with a nine-man rotation and try to use Young more with the bench. The defensive capabilities would be more balanced throughout games.

If Thaddeus Young were to play more with the starters, they would need to incorporate more small ball units or use Leaf more with Turner. The improvement in spacing on offense and Turner's rim protection could be a good combination.

There are a lot of reasons to be excited about this Pacers team and at the very worst, they should be the fifth seed in the Eastern Conference.

The Pacers do appear to have the potential to get into the top three if the main variables that they will face play into their favor.