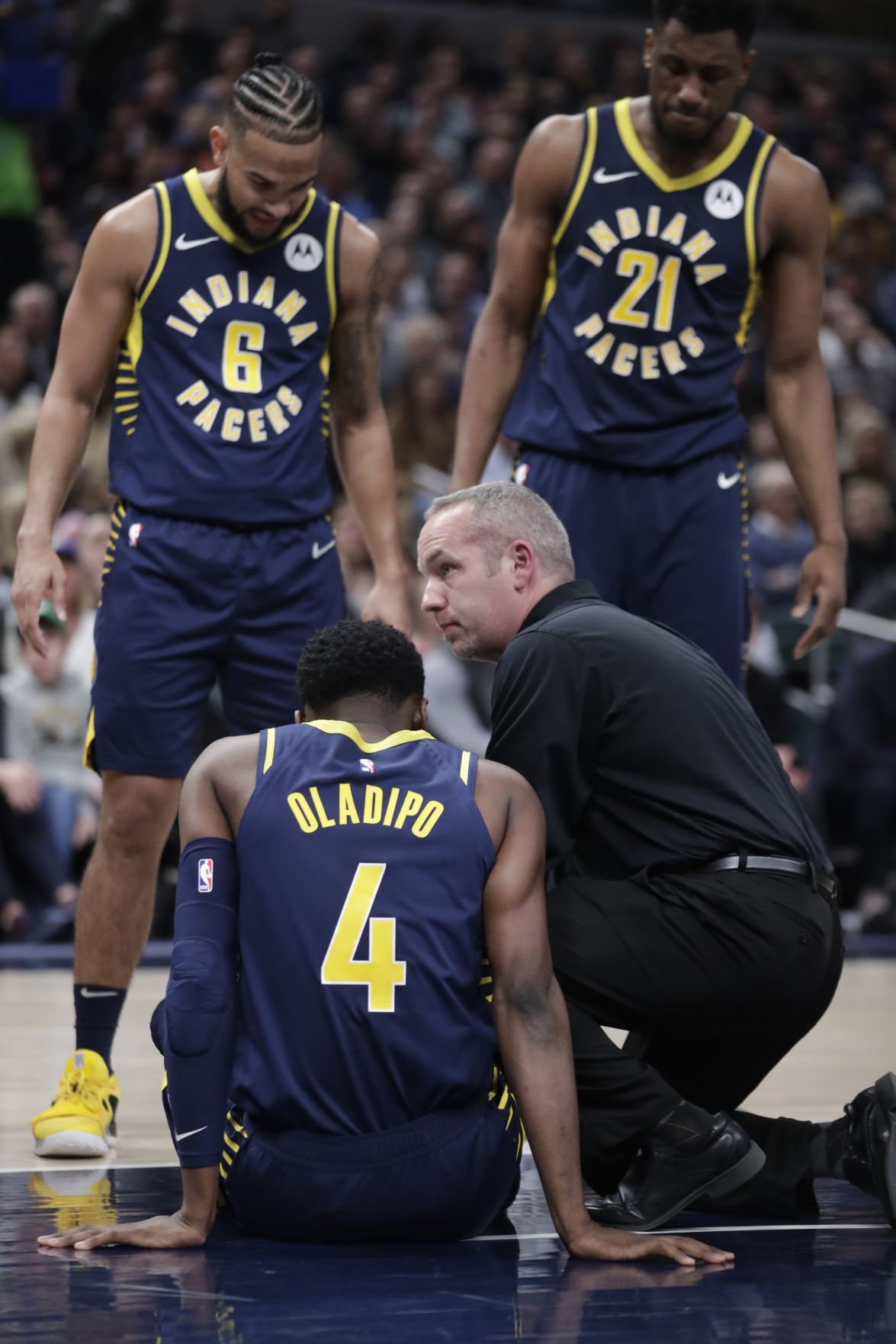 DOWN: Indiana guard Victor Oladipo is checked by team personnel after falling to the floor with a knee injury during the first half of the Pacers' game against Toronto on Wednesday in Indianapolis. Oladipo suffered a quadricep tendon rupture.

DOWN: Indiana guard Victor Oladipo is checked by team personnel after falling to the floor with a knee injury during the first half of the Pacers' game against Toronto on Wednesday in Indianapolis. Oladipo suffered a quadricep tendon rupture.

The worst possible thing happened for the Indiana Pacers on Wednesday during their victory over the Toronto Raptors. Victor Oladipo suffered a serious knee injury. The All-Star guard’s season is over and the focus now shifts to the rehabilitating process.

The injury occurred at the 4:05 mark of the second quarter when Oladipo tried to contest Pascal Siakam in a fast-break situation. The All-Star guard slipped and was unable to make a clean landing. With an apparent injury to his knee cap, the team’s medical staff covered it up with a towel and ultimately had to load him onto the cart and wheel him off the court.

“I just slipped and knew it was serious,” Oladipo said after the game. “We’ll see what [Thursday] shows and go from there. My teammates stepped up earlier this season and everyone has the utmost confidence going forward

The MRI on Thursday ultimately revealed that he had suffered a quadricep tendon rupture. The recovery timetable was not provided, but the Pacers will need to adjust to not having their star guard for the remainder of the season and likely for the start of next season as well.

While Oladipo’s injury is undoubtedly unfortunate and hurts the team, it’s not time to panic. As things stand, the Pacers have a 32-15 record and rank third in the Eastern Conference standings. That is simply too good of a record to entertain the idea of tanking. Let’s not forget that they have an 7-4 record when Oladipo doesn’t log a single minute of action and are 9-4 when he played 10 or fewer minutes too.

A ‘never give up’ mentality was what the Pacers adopted once Oladipo went down and they will need to hang onto that to close the season. They could have easily folded and mailed it in for the rest of the night but that wasn’t the case. Led by Thaddeus Young, the team stuck together and hung on to win 110-96.

“We just tried to stick together is one of the biggest things,” Young said. “We always want to stick together through thick and thin. We know with Vic going down, it was definitely going to be tough. But we want to keep fighting for him.”

While it is very difficult to envision a team managing to make a run at the Eastern Conference without their All-Star guard, there is still a lot left for the Pacers to play for to close the season. There are five rotation players that are in contract years and they certainly can prove that they are capable of more given more opportunity.

With Oladipo sidelined, it is likely that Tyreke Evans will start at the shooting guard spot and Aaron Holiday will slide back into the Pacers’ rotation. He received an average of 16.7 minutes during those 11 games and the team used Cory Joseph more at the shooting guard position. It would be wise to get Edmond Sumner at the active roster as the next available guard in the bullpen.

Now is better than ever for Evans to find a rhythm and produce closer to how he did last season for the Memphis Grizzlies. He underachieved during the games that Oladipo missed and that can’t happen to close the season. In fact, he has averaged only 10.4 points while shooting 34.5 percent from the field and 31.1 percent from deep in those particular performances.

While Evans did struggle during his starts, the first unit has found success with him on the floor. During the 194 minutes that he has spent with the rest of the regular starting lineup, the Pacers have produced a 110.2 offensive rating, a 99.3 defensive rating and a 10.9 net rating. Most importantly of all, they continued to take pride in their defense and they still found offensive results.

The scoring load was shouldered by Bojan Bogdanovic during the performances that have taken place with Oladipo out of the lineup. During those displays, he has averaged an impressive 19.4 points and only 1.5 turnovers while shooting 53.1 percent from the field, 44.9 percent from deep and 82.2 percent on free throws. He will likely be needed as their top option once again.

Collison took on a pass-first role during the nights that Oladipo has missed this season. He averaged 8 assists and that was just 0.3 shy of his average of 8.3 field goal attempts. While at least somewhat of a scoring bump is likely needed from him, bringing this kind of facilitation could be the glue that holds their offense together.

The Pacers should look to begin experimenting with different components of their team to see what works. Allowing Myles Turner to attempt five 3-pointers per game and seeing how efficient he can be is an example of beta testing without compromising the team’s intentions of winning.

With the starting lineup losing their top option in Oladipo, there will never be a better time to increase Turner’s offensive involvement. He has already solidified himself as the anchor of the team’s defense through his elite impact, but his role within their half-court offense has remained practically the same in terms of usage.

The Pacers would become a more dynamic team if they could get Turner to reach another level or two on the offensive end of the floor. Having a stretch-five that can anchor a defense is unique, but having that player also be a versatile scorer on top of that would be the makings of a truly special player.