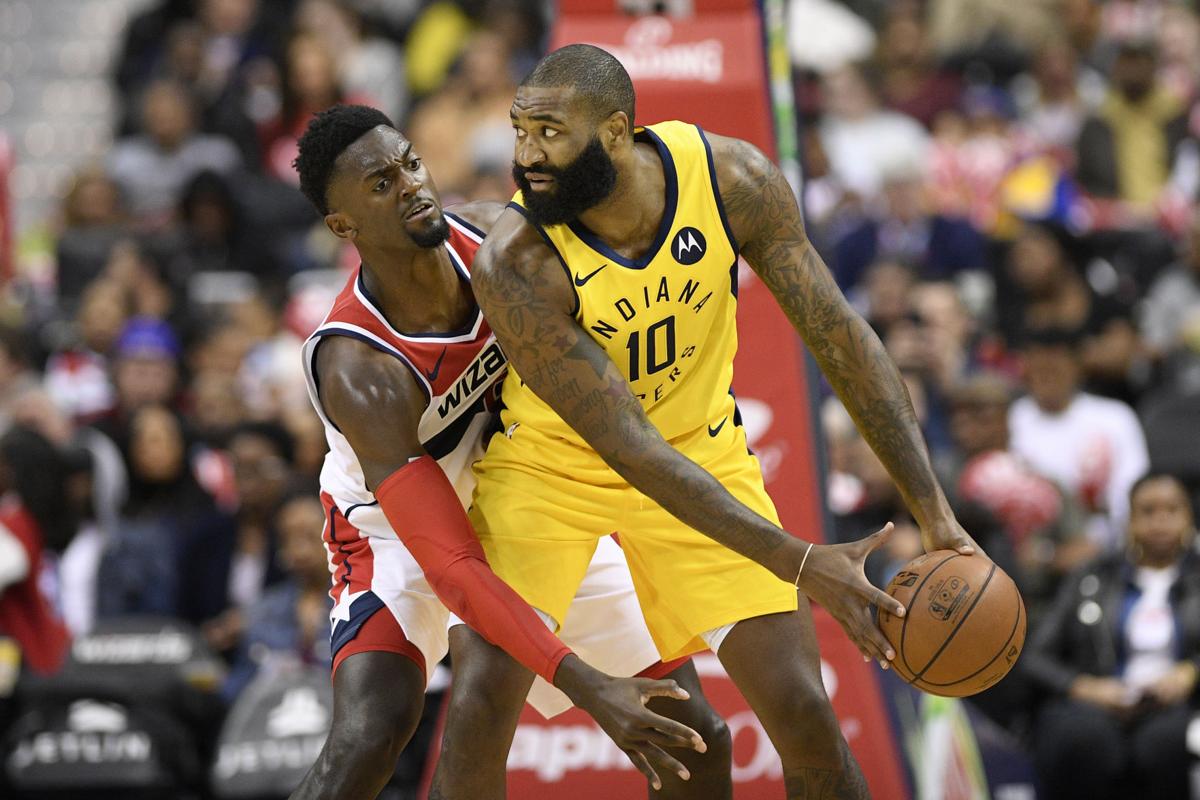 IN THE POST: Indiana center Kyle O'Quinn protects the ball from Washington forward Bobby Portis during the second half of the Pacers' 119-112 win Saturday in Washington.

IN THE POST: Indiana center Kyle O'Quinn protects the ball from Washington forward Bobby Portis during the second half of the Pacers' 119-112 win Saturday in Washington.

No season is free of adversity and the Indiana Pacers can certainly attest to that.

Their latest bump in the road was an ankle sprain that Domantas Sabonis suffered during the final moments of their loss to the Detroit Pistons on Monday.

The injury that Sabonis suffered will sideline him for at least "a couple of games" based on what Nate McMillan told the media after Tuesday's practice. There have been issues with swelling and being unable to place pressure on the ankle.

"He's got a lot of swelling," McMillan said to the media about Sabonis' injury (via IndyStar). "He's going to be out for a couple games. He's not walking with crutches, but he can't put a lot of pressure on it."

McMillan also mentioned that Kyle O'Quinn will fill the backup center role while T.J. Leaf will also receive minutes. Both players are not regularly in the Pacers' rotation so this will be as good of an opportunity as they will get to showcase their abilities this season.

It's simply that time of the year again considering how there are some minor issues that other players are dealing with as well. Tyreke Evans is dealing with food poisoning, Thaddeus Young is playing through floor burn on his non-shooting hand and Myles Turner has had to work his way back into form after missing two games following the All-Star break.

There is going to likely be a legitimate need for adjustments for the Pacers without Sabonis because so much of their bench unit's offense is run through him. To put it into perspective, he averages 64.3 touches and that is the highest figure on the team despite playing just the seventh-most minutes.

While it may take at least somewhat of an adjustment period without their regular backup center when the bench unit is on the floor, the Pacers are used to the next-man-up mentality. Young expressed the belief that Laef and O'Quinn can step up in Sabonis' absence.

"Domas is going to be missed but we think we can handle it with those two guys coming in soaking up those minutes," Young said (via IndyStar). "T.J. has the ability to score. Kyle, we know he's a bruiser, a rebounder, a defender and can knock down the mid-range jump shot. We'll be good."

The sample size is quite small but for those who are interested in seeing how the Pacers have fared with Leaf and O'Quinn on the floor together, the results have been a net positive so far. Entering Wednesday, they had played 112 minutes together and produced a 5.5 net rating.

The reason why the Pacers signed O'Quinn in the offseason is for these very situations. He is a veteran with seven years of NBA experience and is solid in many facets of the game on both ends of the floor, so there should be stability there.

"It's tough to stay ready but it's my job. This is what I'm paid to do," said O'Quinn (via IndyStar). "Wins feel good when you're a part of them. You want to be on the floor."

Just look at how O'Quinn performed during the two games that Turner missed after the All-Star break. He averaged a solid 20.8 minutes, eight points, eight rebounds, four assists and 1.5 steals while shooting 58.3 percent from the field.

Leaf is a player with a lot more to prove than O'Quinn and this upcoming stretch of games could be his best remaining opportunity to showcase his abilities before heading into the offseason.

There have been flashes that Leaf has shown, particularly in the post and on the offensive glass, that have been intriguing to see even if the sample size hasn't been extensive. Continuing to thrive in those areas while also recovering his efficiency as a shooter in spot-up and on free throws should be his goals.

Now would also be an opportune time to play Turner longer than they normally do and to lean on him for more playmaking throughout games. Through Monday's game, he was averaging merely 28.2 minutes per game with just a 20 percent usage rate.

Entering Wednesday, there had only been nine games this season when Turner had logged at least 32 minutes of action and 25 games when he had played at least 28 minutes. Keep in mind that he has suited up for 54 of the Pacers' 61 games. It is worth noting that the Pacers had posted an 8-4 record when Turner played at least 32 minutes. He averaged an impressive 17.2 points, 10.4 rebounds, 1.7 assists, 1.4 steals and 3.2 blocks in those particular performances.

Another option that the Pacers have while Sabonis is sidelined would be to deploy more small-ball lineups that emphasize perimeter shooting. That would create ideal conditions for the team's high pick-and-roll oriented offensive philosophy and help maximize their 3-point volume.

The Pacers had only played Turner, Bojan Bogdanovic and Doug McDermott together for 39 minutes so far this season through Monday. That particular combination is worth experimenting with more since teams are not going stop attempting a lot of 3-pointers.

While no win is easy in the NBA, the Pacers at least will not be starting the difficult portion of their schedule likely until Sabonis returns to the lineup. Their next four games are against teams with losing records three being at Bankers Life Fieldhouse.

The main benefit of the Pacers being a team that has depth is that they can adjust to facing adversity. While it is unknown how McMillan will approach adjusting without Sabonis, he has plenty of options at his disposal.