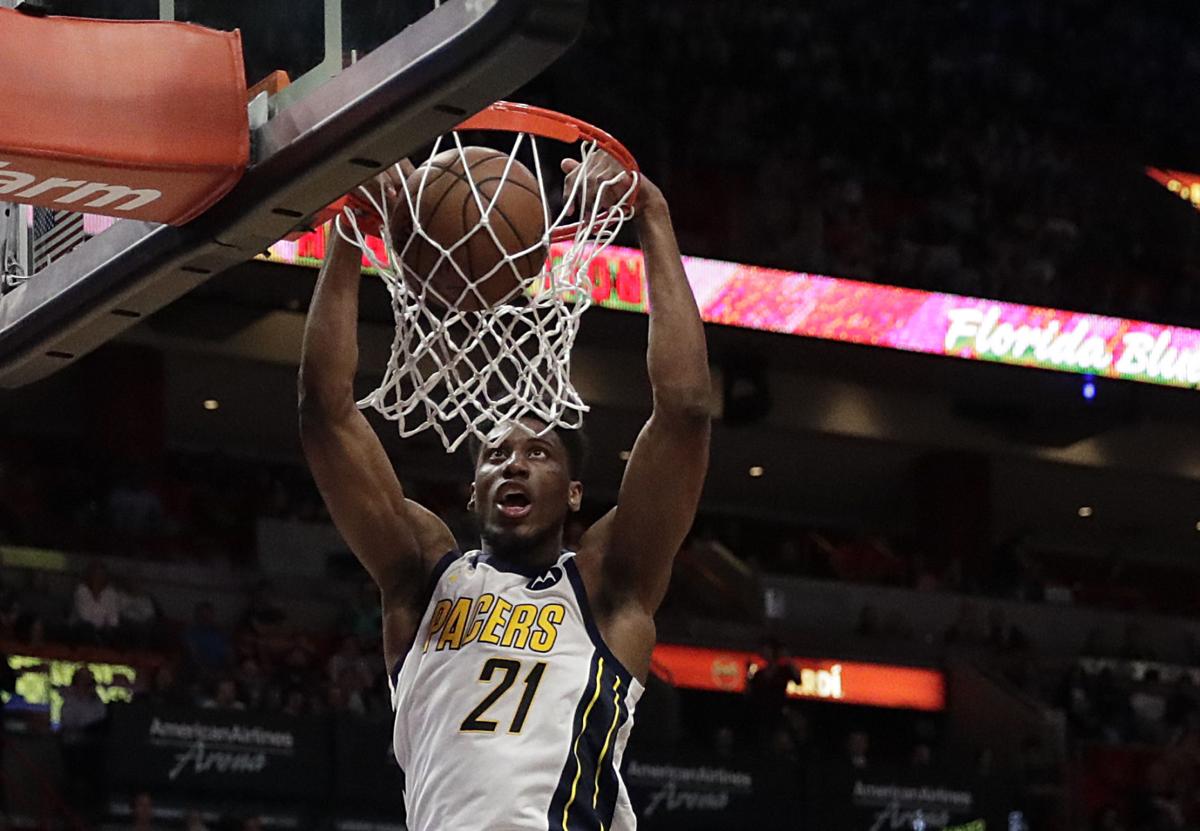 JAMMER: Indiana forward Thaddeus Young dunks during the Pacers' 95-88 victory over the Heat on Feb. 2 in Miami.

JAMMER: Indiana forward Thaddeus Young dunks during the Pacers' 95-88 victory over the Heat on Feb. 2 in Miami.

Nothing comes easy in the NBA and that will certainly be the case for the Indiana Pacers after the All-Star break. They will have to find a way to persevere through a difficult remaining schedule without their All-Star, Victor Oladipo.

The Pacers’ schedule doesn't have difficult matchups immediately after they return to action, but they still have the eighth-hardest overall remaining schedule. Beginning with a visit from the New Orleans Pelicans on Friday, they will play their initial seven games against teams with losing records and will need to capitalize on that.

From there, the Pacers have 17 more games to close the season — including 12 against opponents that currently hold winning records. There also will be some matchups with teams that have losing records but are still in the hunt for a playoff spot in the East. Aside from the New York Knicks, they won’t be facing teams that are blatantly tanking during this period.

It is worth noting that no matter how the Pacers play to close the regular season, they are practically a mathematical lock to earn a trip to the playoffs. In all likelihood, they will finish with a top five record in the Eastern Conference standings with the absolute worst possibility being sixth. However, Indiana finishing sixth would require massive failure from its end and extreme success from the Brooklyn Nets.

The matchups that the Pacers likely will face in a first-round playoff series are not going to be easy. The best-case scenario is that they end up with the third seed and face the Nets. Considering the circumstances, they will probably end up with the fourth or fifth seed and be tasked with facing either the Philadelphia 76ers or the Boston Celtics.

Indiana does not have a true primary offensive option and that will be problematic come playoff time. Just because Bojan Bogdanovic has been able to average 20.4 points per game since Oladipo’s injury doesn’t mean that he will be able to continue to do so when opposing teams key in on him in and make adjustments over the course of a playoff series.

It will be essential for the Pacers that Thaddeus Young is able to consistently convert on open jump shots during the playoffs. While he is shooting 42.1 percent from 3-point range on the season, he is doing so on an average of only 1.7 attempts per game. If he is unable to be a reliable perimeter shooter, the opposition will have a variety of beneficial options in regards to game planning at their disposal.

The 76ers could be especially tough to defeat. They boast a starting lineup that consists of Ben Simmons, J.J. Redick, Jimmy Butler, Tobias Harris and Joel Embiid. They basically acquired two All-Star caliber players since the start of the season. They also have practically a brand new bench unit aside from T.J. McConnell.

The defensive versatility that Philadelphia has could prove to be problematic for a team like the Pacers. They will be able to stick Redick on Wesley Matthews and could stick Embiid on Young if they choose to leave him open. Matthews will not be doing much creating off the dribble so Redick will be able to stay home on his assignment. Meanwhile, Embiid could be able to pre-rotate as a rim protector and clog the interior for Indiana’s offense.

Harris would be able to guard Myles Turner since he is not a frequently utilized post-up threat. The focus for Tobias would be to force Turner to put the ball on the ground when he catches it in the pick-and-pop or spot-up to force him to drive the lane into Embiid’s rim protection. Since the Pacers do not always have Turner pop beyond the perimeter in these situations, the distance that Harris would need to cover is reduced and the process is simplified as a result.

Boston is no slouch either. The Celtics have one of the league’s top defenses and have no shortage of dynamic individual offensive talents like Kyrie Irving and Jayson Tatum. While the size advantage wouldn’t be quite as extreme as the 76ers, the Celtics would have no shortage of favorable individual matchups when tasked with defending the Pacers.

The best potential outcome for the Pacers when matching with either the Celtics or the 76ers is that their offensive chemistry starts to fall apart when the bright lights are shining. There are a lot of players on both teams who are used to having the ball in their hands as focal points. Regardless, Indiana will need to be innovative to produce enough offense of its own.

Let’s not forget that Indiana did not consistently receive positive offensive contributions from role players during its playoff series with the Cleveland Cavaliers last season. That was also despite facing what was ranked the 29th defense during the regular season that also lacked a starting quality point guard for most of the series.

An additional layer of context is needed when discussing the performance of the Pacers’ role players during their last trip to the playoffs. They were unable to achieve enough results despite having their star player taking the brunt of the Cavs’ game-planning efforts. This time around, they will be the ones that are keyed in on instead of Oladipo.

If the Pacers truly are an underrated team that is getting slept on by many, they will have plenty of chances to show it. Their remaining schedule is not easy and the same can certainly be said about their potential playoff matchups, too. They deserve significant respect if they can overcome such obstacles.