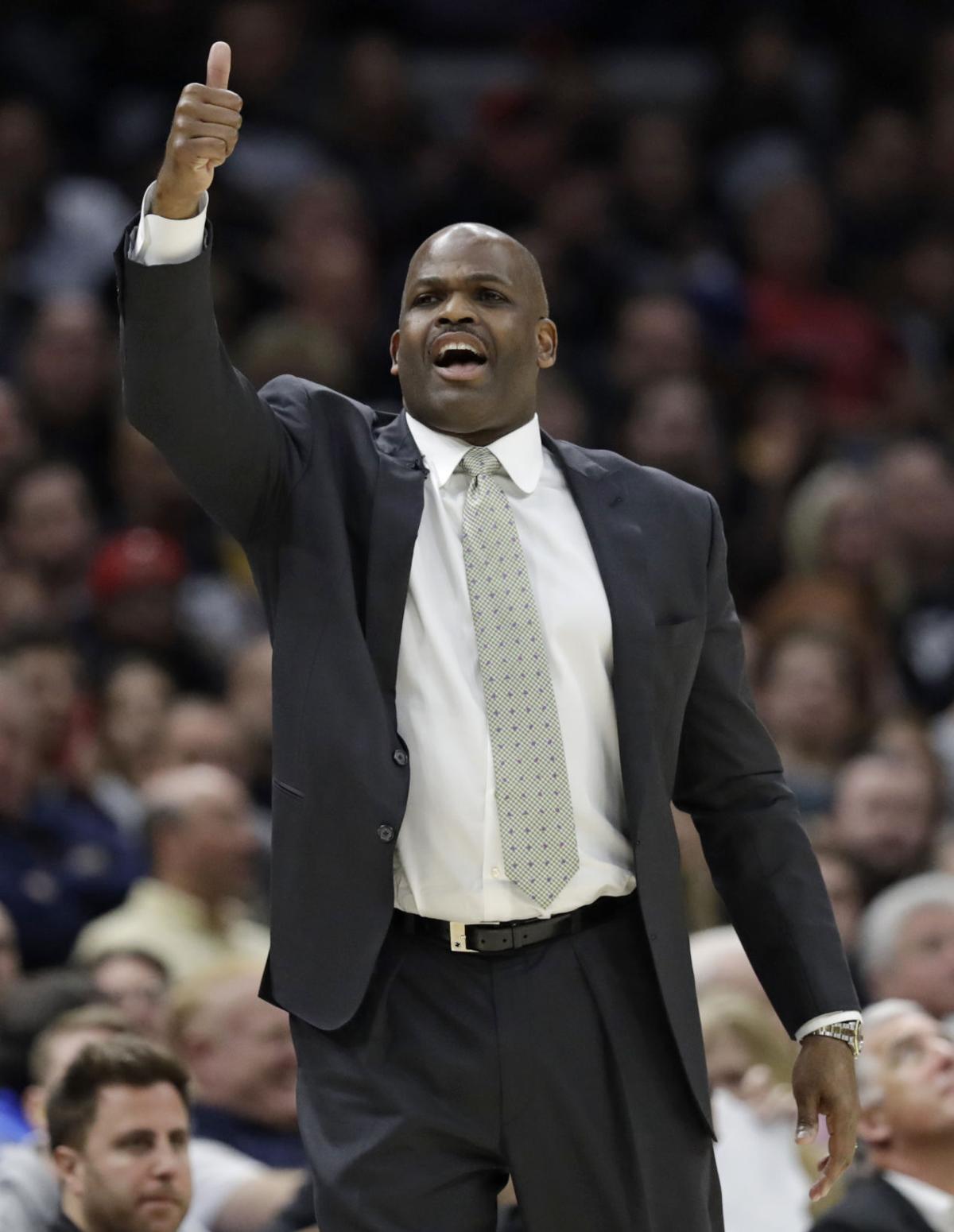 LET'S GO! Indiana coach Nate McMillan yells instructions to players in the second half of the Pacers' 98-80 victory over the Cavaliers in Game 1 of their playoff series on Sunday in Cleveland.

LET'S GO! Indiana coach Nate McMillan yells instructions to players in the second half of the Pacers' 98-80 victory over the Cavaliers in Game 1 of their playoff series on Sunday in Cleveland.

The Indiana Pacers were aggressive and came ready to work in the opening game of their series against the Cleveland Cavaliers. They ultimately got the job done as they took a 98-80 win.

"I think we came out there, we punched them in the mouth that first game," Myles Turner said. "But a team like this can respond and they're going to respond. We've got to be ready for anything they throw our way."

When facing this Cavs team, the key is to be able to find ways to slow down LeBron James and their high-octane offense while taking advantage of their poor defense. James had a triple-double of 24 points, 10 rebounds and 12 assists, but the Pacers held him to 7-of-17 shooting from the field. He missed all four of his 3-point attempts and had three turnovers.

Cleveland was ultimately contained to only 80 points with 16 turnovers and they shot only 38.5 percent from the field, 23.5 percent from beyond the arc and 60 percent on free throws. The Cavs rely on being so good offensively that they can transcend their poor defense and cover up their deficiencies in the possession battle, which did not come close to happening.

"We were pressuring the ball," Lance Stephenson said. "We were into them, making them make tough passes, making them take tough shots. Just making them do stuff that they're normally not used to doing.”

While they weren’t great offensively, the Pacers were still considerably better and they managed to hold advantages in key areas like scoring off of rebounds and turnovers, fast-break scoring and in points in the paint. The good news is that they have plenty of room for improvement offensively so it’s not like they were relying on a ton of ridiculously unsustainable shooting as a team.

The Cavs are not going to be complacent and continue to roll out with the status quo. They are contemplating lineup changes and some strategic adjustments. Coach Tyronn Lue was asked if he will make changes to their lineup and he mentioned that “we’re looking at it” but he made it clear that he isn’t going to provide details.

Indiana will need to be ready to handle LeBron early and often in their next matchup. Lue wants him to come out of the gate aggressive rather than waiting and getting a feel for the game.

"He has to be aggressive and set the tone early," Lue said. "Especially for these new guys, bringing these guys along. He understood that but once again, he's always a guy trying to get his teammates off early, get them guys going, then try to feel the game out. But be ready to set a tone."

Another adjustment to watch out for is that Lue wants Kevin Love to demand in the post and to be physical in those engagements.

Regardless, the Pacers are going to need to continue to embrace a “grit and grind” mentality where they are pressuring ball handlers and being physical to throw off Cleveland’s offense. They will still need to be ready to help against James and especially be ready to help the helper to contest spot-up jumpers.

As for their offense, the Pacers will need to be prepared for the Cavs to blitz Victor Oladipo in the pick-and-roll. He has been instructed to start those sequences far off from the perimeter to have a running start to challenge the defense, which makes it nearly impossible to guard him in single coverage and especially off of switches but blitzing makes that harder to accomplish.

“We don’t have to make a lot of adjustments, especially defensively,” James said. “We were in a really good position. Look at Oladipo’s 3-pointers. Four were straight-up pushes as hard as he can and pull up and jack it in your face. That’s not scheme. That’s just a great player making a great play.”

I would not take James at his word about the Cavs not making many adjustments. It’s important to be prepared for everything and anything. There are many favorable matchups for Indiana offensively and continuing to be aggressive and getting to the rim should be a priority because it settled quite a bit for mid-range jumpers.

The most important thing is that Darren Collison and Bojan Bogdanovic bounce back. While they made strong impacts defensively, they each shot poorly from the field and from beyond the arc. Having them hitting shots that they normally make would help negate much of the improvements that Cleveland could make.

"We've got to be better," Collison said. "There's some things that we can improve on that I was looking at in the film. We can do better in a lot of different areas. We can't just take Game 1 and say we don't have to [make] any improvements. We can be better."

Turner could be a good option to look to considering how he was effective with his post touches. The team didn’t run many pick-and-rolls for him and they could use Collison as the ball handler to make the game easier on Oladipo since the Cavs will probably be blitzing him and playing him tight.

The bench will need Stephenson to reel it back a bit considering how he led the team in usage rate and had more shot attempts than both Turner and Collison. As for the rest of the bench, they will need to evaluate how much they can use Domantas Sabonis because he couldn’t cover ground defensively or protect the paint that well.

Grant Afseth provides a weekly look at the Indiana Pacers. He may be reached at grantafseth@indianasportscoverage.com.