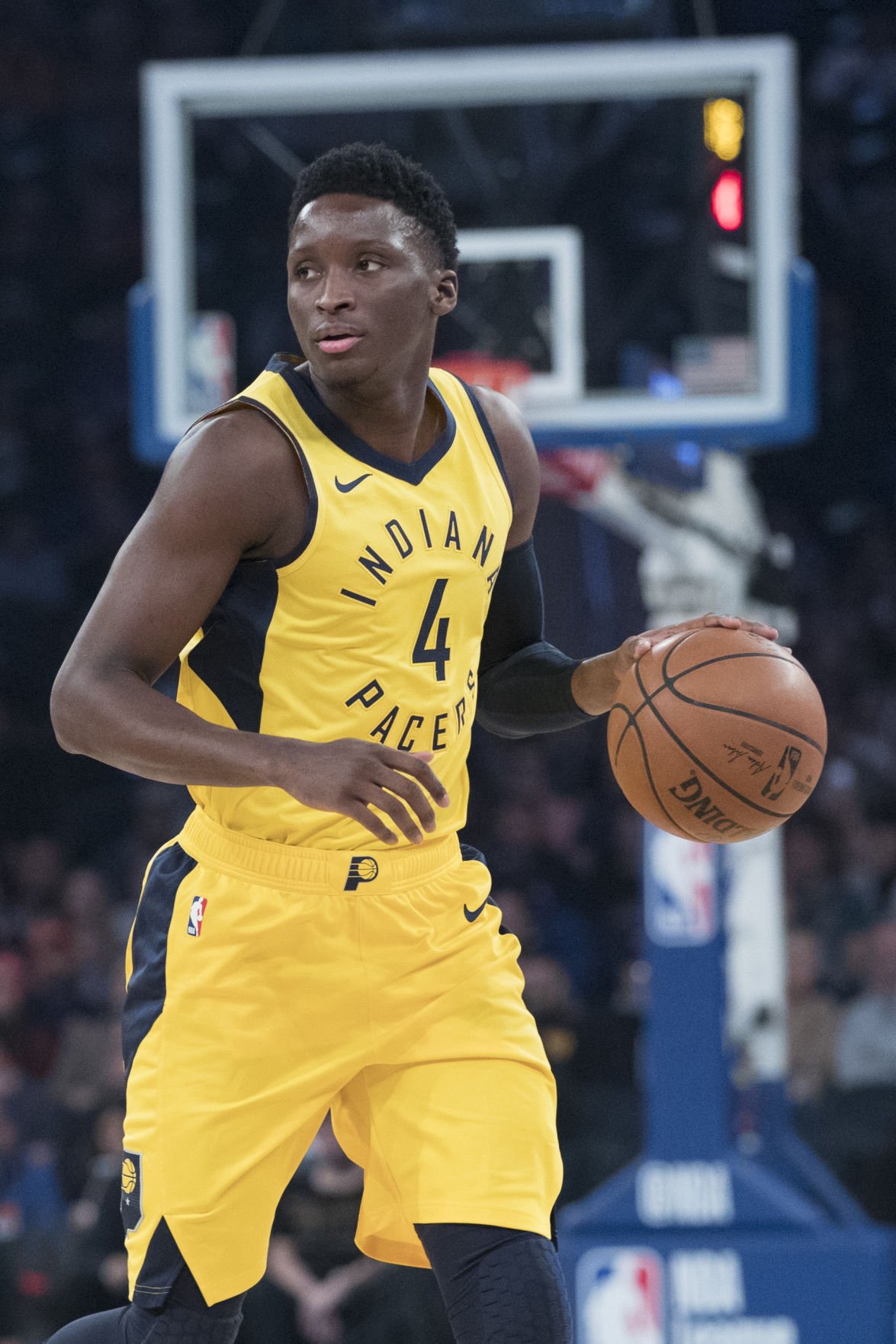 GO-TO PLAYER: Indiana guard Victor Oladipo handles the ball during the Pacers' game against the Knicks on Oct. 31 at Madison Square Garden in New York.

GO-TO PLAYER: Indiana guard Victor Oladipo handles the ball during the Pacers' game against the Knicks on Oct. 31 at Madison Square Garden in New York.

There are not many players in the NBA who can be trusted with the ball in their hands when the game is on the line as much as Victor Oladipo.

On Saturday, Oladipo scored 10 points in the fourth quarter against the Boston Celtics with seven coming in the final 52.1 seconds. He ultimately converted on a pull-up 3-pointer with 3.4 seconds remaining. After preventing the Celtics from scoring on their final possessions, his 3-pointer stood as the game-winning shot.

"I’m going for the win," said Oladipo. "Not because I’m saying I have to every time, but you’ve got to give yourself the confidence to do it and believe that you can do it. I’m not going to say every time we’re down two in a home game that I’m going to shoot a 3, but I’m just going to make the play that’s there."

It’s certainly not the first time that Oladipo has made a game-winning shot. Last season, he converted on a step-back 3 against the San Antonio Spurs during the fifth game of the season. That was the moment that he popularized his "this is my city" celebration.

Moments like that big shot early last season helped Oladipo build confidence and reputation as a star player. He headed into the summer with the mentality that he wanted to take another step forward as a player and be prepared for big moments. In fact, he talked to J. Michael of the IndyStar in an interview in Miami over the summer about this exact subject.

"I push the envelope. I play nothing safe now. I’m the guy if we’re down two, I'm pulling up for 3," Oladipo said.

Being a clutch performer isn’t limited to solely game-winning shots, though. There are many moments throughout the final few minutes when Oladipo will convert on a big shot to either build on a small lead, or to keep his team within striking distance.

Last season, Oladipo averaged 3.5 points in clutch situations while posting a 59.6 percent true shooting percentage. His scoring average ranked eighth in the NBA among all players that appeared in at least 15 games worth of clutch situations.

So far this season, Oladipo is averaging 7.2 points in clutch situations while fashioning a ridiculous 83.6 true shooting percentage. To put his scoring in big moments into perspective, only Devin Booker (5.5), Zach LaVine (5.4), Kemba Walker (5.4) and Reggie Jackson (5.4) are averaging over five clutch points per game with at least multiple clutch performances.

The individual success of Oladipo in late game situations has translated to team success for the Pacers. Since the start of last season, playoffs included, Indiana has posted a 14-4 record in games decided by three points or less. That is the best record in such games during that span.

While it’s great that the Pacers have one of the games top clutch performers, it’s important that they don’t become too reliant on it. The playoff series against the Cleveland Cavaliers is a great example of that because it shows how teams in playoff situations will look to pressure Oladipo.

During the series against the Cavs, Oladipo averaged only 0.8 points in clutch situations and had a horrendous 25.8 true shooting percentage. Despite being the 29th ranked defense during the regular season, Cleveland’s choice to send pressure to Indiana’s star worked.

The Pacers lost their four playoff games against the Cavaliers by a total of 14 points, which translates to an average defeat of only 3.5 points. Being ever so close to defeating a LeBron James-led team four times and only needing one those games to go the other way is as close as it gets.

Indiana’s best chance at a secondary closer to alleviate pressure from Oladipo is Tyreke Evans. That was one of the main themes mentioned about why the signing of Evans was so going to be so beneficial.

It’s early in the season, but Evans has only played in one of 21 possible minutes in clutch situations. With his ability to play at any perimeter position, he could play next to Oladipo at either the point guard or small forward spots. Instead, in clutch situations, the team has played Bojan Bogdanovic for 20 minutes, Darren Collison for 14 minutes and Cory Joseph for seven minutes.

There are more aspects to closing games that the Pacers have to think about. There needs to be a fine balance of floor spacing, defensive impact and rebounding. Indiana has a variety of different options at each supporting cast position to put next to Oladipo.

The most controversial aspect of fielding a late game lineup is the choice between Myles Turner and Domantas Sabonis for the center spot. If rim protection and floor spacing is needed, Turner is the best option. If interior scoring and rebounding are required, Sabonis is the choice.

Another position where there are a variety of choices is the point guard position. Considering how Evans has not yet played point guard for the Pacers, the options likely come down to Collison and Joseph. The defensive option among the two is Joseph while a more versatile offensive impact can be provided by Collison.

The rest of the unit is rather straightforward. Thaddeus Young is clearly the top power forward option because of his perimeter defense. The small forward position comes down to wanting more of a catch-and-shoot player like Bogdanovic or a playmaker like Evans.

With the leadership of Oladipo as their lead clutch performer and a cast of effective supporting pieces, the Pacers should be able to consistently close out games and field large comebacks like they did last season. This time, they have the luxury of integrating an additional dynamic playmaker to make it harder on the defense.