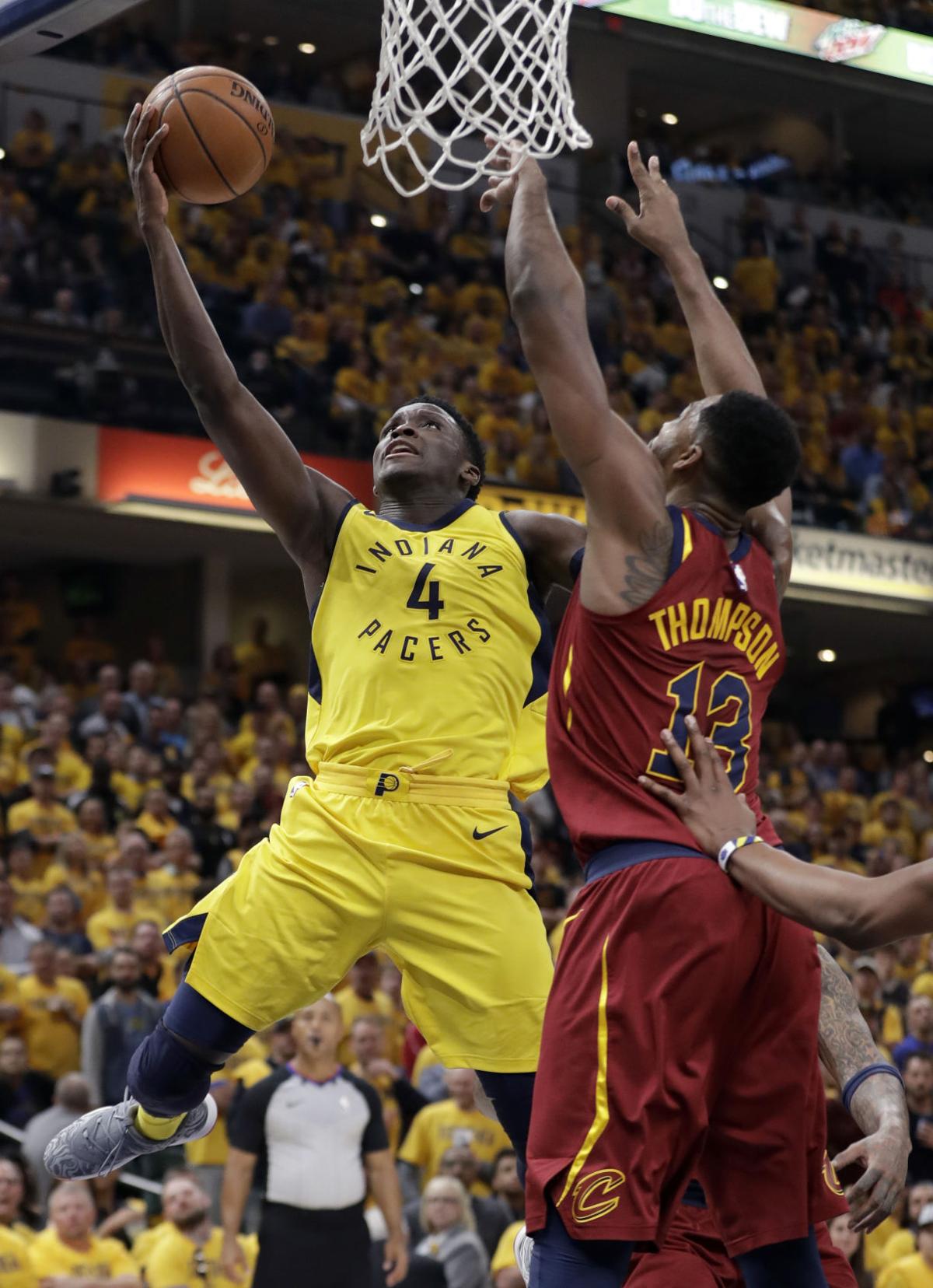 ATTACK MODE: Indiana guard Victor Oladipo shoots over Cleveland's Tristan Thompson during the second half of Game 6 on Friday night in Indianapolis. Oladipo had a triple-double in the Pacers' 121-87 win, which pushed the series to a decisive Game 7.

ATTACK MODE: Indiana guard Victor Oladipo shoots over Cleveland's Tristan Thompson during the second half of Game 6 on Friday night in Indianapolis. Oladipo had a triple-double in the Pacers' 121-87 win, which pushed the series to a decisive Game 7.

The Indiana Pacers avoided elimination on Friday night following their 121-87 victory over LeBron James and the Cleveland Cavaliers in Game 6. As a result of their victory, they will play Game 7 at 1 p.m. Sunday at the Quicken Loans Arena in Cleveland.

A key for the Pacers has been their defensive adjustments. LeBron James was able to score 44 points in Game 5 and he received just enough help to get a win. Indiana’s offense continued to be poor in that game so outscoring the Pacers wasn’t too much of a challenge for Cleveland. Regardless, it served as a great resource for the Pacers to bounce back for Game 6.

The most troubling aspects of that particular performance wasn’t even the missed goaltend call on Oladipo’s late drive to the basket. To me, the worst parts were the fact that LeBron had 30 drives in a single game, got to the free throw line 15 times and Indiana’s top player in Oladipo shot 2-of-15 in the game.

Basically, my point being that those aspects to Game 5 were bad for the Pacers, but they did give reasons for positivity. It took some ridiculous individual contributions from LeBron and it took Oladipo to play one of his worst games of the season just to have the Cavs win by three points.

It was up to the Pacers to make defensive adjustments to force LeBron to settle far jump shots far more than he did in Game 5. They ended up accomplishing their task by containing James to only 22 points with his lowest field goal percentage of the series. The best part was that he only had five free throw attempts and he had only 12 drives.

"We are figuring out their different schemes and ways to guard them, and we're making adjustments through the course of games," Thaddeus Young said. "[Assistant coach Dan Burke] is devising a great plan for the defensive side of things and we're going out there and following through."

The whole construct of the Cavs is to have James dominate the playmaking responsibilities by having him score a high volume of points while also creating good shots for shooters. While he doesn’t have to drive the lane to create favorable attempts for his teammates, it at least makes it easier to defend Cleveland if he is not doing it that way a lot.

"We were better connected on both ends of the floor," Pacers coach Nate McMillan said. "I thought the defense was connected. We were solid offensively. We moved the ball, attacked the basket and pretty much played that way for the 48 minutes"

Oladipo ended the night with the third playoff triple-double in Pacers history, joining Paul George and Mark Jackson as the only players in franchise history to accomplish this feat. He recorded an impressive 28 points, 13 rebounds, 10 assists and four steals and had only two turnovers.

"Just went out there and played,” Oladipo said. “Did everything with confidence. Didn't overthink it. Just play, read, and react.

"I just got out of my own way and made shots. I was shooting the shots I've been shooting all year, just shot them with confidence."

It actually was that simple for Oladipo. He was missing a lot of shots that he was making in the regular season and he just hadn’t yet adjusted to the ramped up level of defensive pressure that the Cavs were sending his way. He came out calm, collected and calculated and broke down the defense.

Winning any Game 7 in general is hard enough, but the degree of difficulty only strengthens when you factor in that it is on the road and especially since it is against James. However, difficult does not mean impossible.

The key for the Pacers will be to continue to exploit the Cavs’ defense like they did in Game 6 while not letting LeBron to have an insane enough performance to make up for it. There are plenty of reasons why Cleveland was one of the worst defensive teams during the regular season and one man is still only one man.