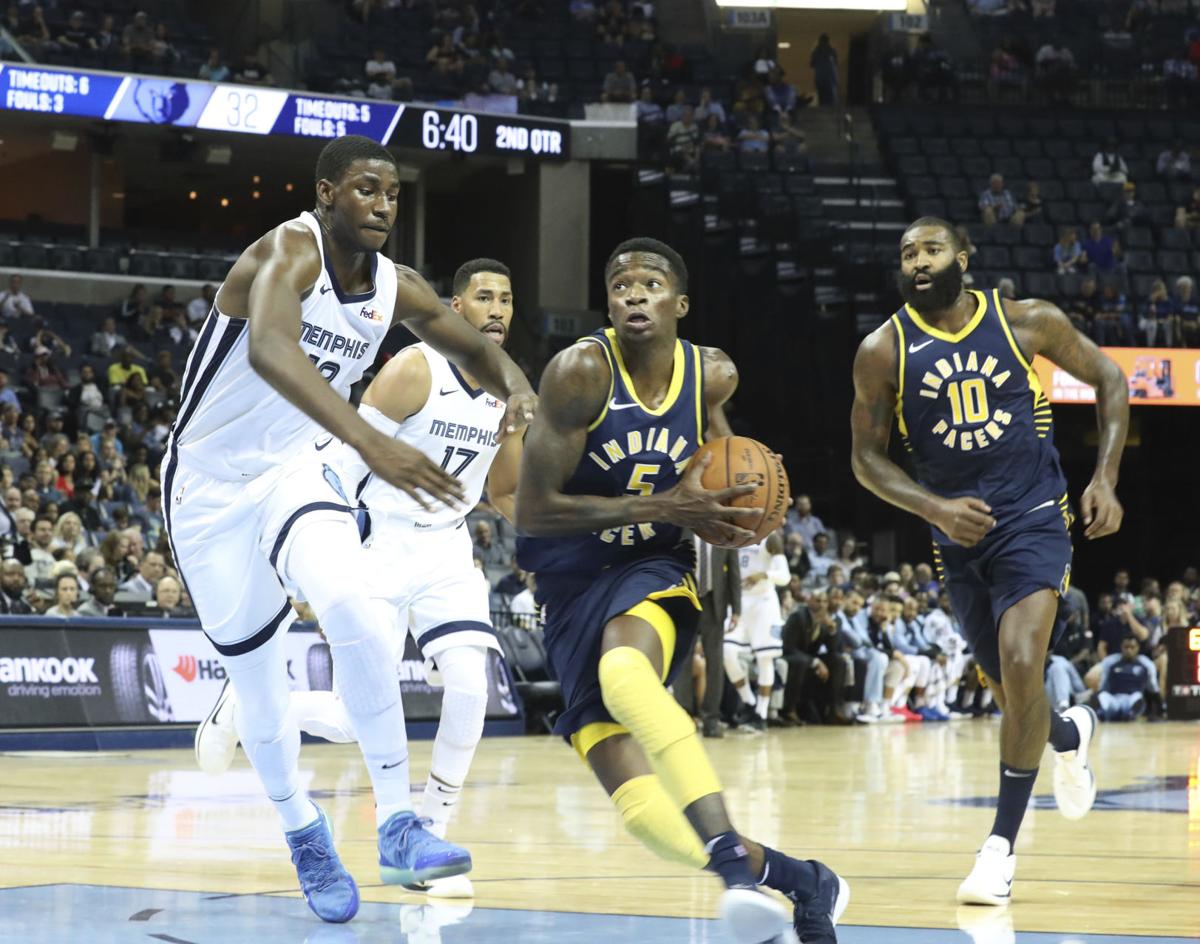 ATTACKING: Indiana Pacers guard Edmond Sumner goes up for a basket during a preseason game against the Memphis Grizzlies on Saturday in Memphis, Tenn.

ATTACKING: Indiana Pacers guard Edmond Sumner goes up for a basket during a preseason game against the Memphis Grizzlies on Saturday in Memphis, Tenn.

For players who are not a lock to have a role in a team’s rotation during the regular season, it’s crucial they make the most of their time on the floor in preseason.

It’s especially important for the Indiana Pacers' Edmond Sumner to make the most of his preseason minutes since he is currently signed to a two-way contract. The preseason is likely his best opportunity to earn a better contract and to showcase his talent before spending most of his season in the G League.

Sumner has been very impressive through the first three games of the preseason. The Xavier product has averaged an efficient 11 points per game and has added averages of 1 rebound, 1.3 assists, 1.7 steals, 0.3 blocks, and only 0.7 turnovers to go along with his scoring.

On the offensive end of the floor, Sumner has shown a lot of good things. He has been able to put his length and athleticism to great use in transition. Within the half-court, he has displayed an impressive ability to get into the paint off the dribble and finish at the rim through contact.

The impact that Sumner has made has not been limited to just offense. He has shown strong potential as an on-ball defender and as a help defender. He particularly has done an effective job of forcing turnovers, whether by ripping the ball loose after rotating in help defense or directly in on-ball situations, and by playing the passing lanes.

There is an impressive foundation of a skill-set that Sumner has as a player that suggests that he could be quite an impactful player one day. There is a lot to like about a 6-foot-5 guard with a 6-8 wingspan and explosive athleticism like him. There is even more reason to be intrigued when a player with those tools is already showing production.

If Sumner can continue to grow as a pick-and-roll ball handler and perhaps solidify himself as a reliable catch-and-shoot player, it will be difficult to deny him playing time. However, there are more circumstances regarding a role in a team’s rotation that go beyond playing time.

With a loaded point guard rotation between Darren Collison, Cory Joseph and Aaron Holiday, there aren’t minutes to go around in the regular season at that spot.

It appears as if the main way that Sumner could find time with the Pacers during the regular season would be at the shooting guard spot. Their depth chart is thin at that position and if Victor Oladipo or Tyreke Evans were to get injured, Sumner is a logical choice to play.

Hypothetically speaking, Indiana could slide Joseph over to the shooting guard spot if necessary and play Holiday at backup point guard in the event of an injury to Oladipo or Evans. There are defensive limitations with having a small backcourt, though.

The size and particular skill-set that Sumner has as a player makes him a great fit to fill in for Oladipo or Evans in the event of an injury. Indiana relies on both shooting guards for their playmaking and Sumner appears to be one of their only options that could at least fill some of that void.

Regardless, since Evans has struggled to stay healthy in recent seasons, it would be wise to have Sumner on the active roster with a regular NBA contract. A transaction of this kind would be similar to what the Pacers did with Alex Poythress last season.

Finding time for Sumner may not require an injury, though. If Indiana wants to maximize their playmaking at times, they could use a lineup that features Sumner and Evans since they both possess positional versatility. They were impressive on the floor together on Monday against the Cavaliers. They created their own shots well and also facilitated to teammates as well.

With Sumner currently on a two-way contract, the Pacers are only allowed to have him throughout the season for up to 45 days. For the rest of the time, he has to be with the team’s G-League affiliate, the Fort Wayne Mad Ants.

The benefit of signing Sumner to an NBA contract and not a two-way deal is flexibility. With a regular NBA contract, the Pacers could assign him to the G League at any time since they can do that with players who have at least three years of experience or less.

Ultimately, the Pacers could have Sumner develop with the rest of the team in practice throughout the season more than what they would be able to do if he was on a two-way contract.

Building chemistry with teammates and furthering Sumner’s development as much as possible are both important because injuries are never predictable. Spending that extra potential time with the team could allow him to prove to the coaching staff that they should play him, too.

If it doesn’t quite work out this season for Sumner to receive much playing time, there is a much clearer pathway beyond in the future. The Pacers have Collison, Evans and Joseph all entering the final season of their contracts. Not retaining them all would make it easier to give Sumner a spot in their rotation.

If Sumner can continue to impress in the short term, the Pacers could face a good problem by having to figure out how to make room for him. At the very least, he has shown why the Pacers should be intrigued with his potential as a prospect.