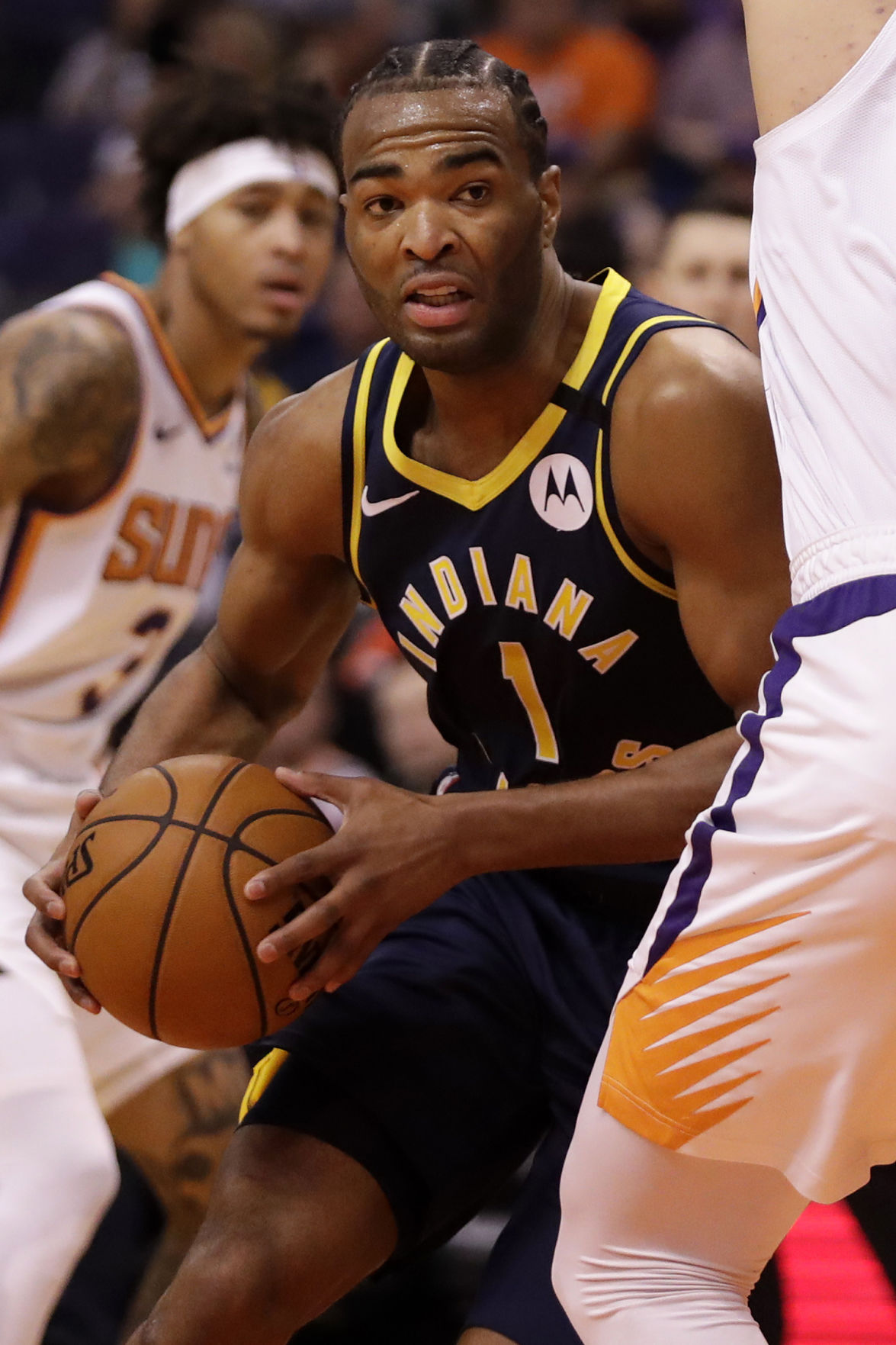 Indiana forward T.J. Warren drives to the basket during the first half of the Pacers’ game against the Suns on Wednesday in Phoenix. Playing against his former team, Warren scored a game-high 25 points, leading the Pacers to a 112-87 win.

Indiana forward T.J. Warren drives to the basket during the first half of the Pacers’ game against the Suns on Wednesday in Phoenix. Playing against his former team, Warren scored a game-high 25 points, leading the Pacers to a 112-87 win.

Ahead of free agency over the summer, the Indiana Pacers were facing a potentially difficult situation. Bojan Bogdanovic was set to hit free agency and there weren’t many potential replacement options on the open market.

The Pacers ultimately decided to acquire T.J. Warren from the Phoenix Suns to serve as a potential replacement for Bogdanovic. With the Suns looking to clear cap space, they sent Warren and also the No. 32 pick to the Pacers in exchange for cash considerations. At the time, there were concerns about Warren’s durability and an inability to make a positive defensive impact.

There was a real determination from Warren to prove to the rest of the NBA that the Suns “messed up.” Being traded by a team is one thing, but practically getting dumped with an asset to just get him off the books is another level.

“I’m ready to show the whole NBA — and not just the Suns for making the wrong decision — that the Pacers made the right decision,” Warren told The Athletic. “I’m worth more than cash considerations. It’s on me to prove it. But the Suns messed up.”

So far, Warren has done everything he can to prove his point with averages of 18.0 points and 3.4 rebounds per game. His scoring efficiency has been terrific as well; he is producing 1.096 points per possession, which trails only Anthony Davis among the 51 players with at least 700 possessions.

In addition, Warren hasn’t missed a single game due to injury and has already played two more games this season than he did in all of 2018-19.

The decision to trade for Warren has paid major dividends and the Pacers’ 112-87 win over the Suns on Wednesday was a strong representation of that. He led the team in the scoring department with an efficient 25 points while also guarding the opposing team’s top scorer, Devin Booker, who is averaging 30.9 points per game in January.

“He’s a two-way player,” Pacers coach Nate McMillan told The Athletic. “I don’t think he got that credit when he came to our team. A lot of people were questioning his defense. … He hasn’t missed a game this season and has been consistent on both ends of the floor.

“We didn’t buy into what people were saying that he couldn’t do it. That was the challenge, that’s been the challenge for all of our guys — to defend, rebound the basketball and offensively, do the things you’re capable of doing. He can expect to be challenged to defend and he’s done a really solid job for us.”

Perhaps the next dimension that can be considered that Warren has added is his defense. He has accepted the challenge of becoming a more impactful defender for a team with aspirations of competing in the playoffs. There is more required of a player that is competing on a winning team as opposed to one that has their best hope of landing the first pick in the upcoming NBA Draft.

“I think he’s absorbing everything that we’re trying to tell him, teach him and challenge him on,” McMillan told the Indy Star. “As far as defending, he’s not questioning his matchups each night. We are giving him the first or the second option between the guards. He’s guarded small forwards, power forwards, point guards and a few games ago, we had him on [Devonte’] Graham in Charlotte and he took that challenge.”

The matchup with the Suns was a terrific opportunity for Warren to showcase all of the improvements he has made against a team that basically gave up on him. Despite that fact, he prepared for it like any other game, but it still had ‘a lot of emotions’ associated with the matchup.

“Absolutely it was different. Engaging with the fans a little bit, their reaction,” Warren said. “There was a lot of emotions but as soon as the ball went into the air it was time to play basketball and that’s all I was focused on. It definitely felt good to come back to a place where I spent my first five years. Like I said before, they gave me my start, they started my career. I’m very grateful for that and it feels good to get a win.

“Same approach as any other game to me. It’s all basketball, it’s all about hoops. It felt good to get a win.”

The best part of all for the Pacers is that Warren is under contract through the next two seasons as well and for good value. He is set to earn $11.75 million in 2020-21 and $12.69 million in 2021-22. That will considerably simplify the team building process for the Pacers when they have to take care of a new contract for Victor Oladipo.

Grant Afseth is the Tribune’s Pacers columnist. He may be reached by email at grantafseth@indianasportscoverage.com.