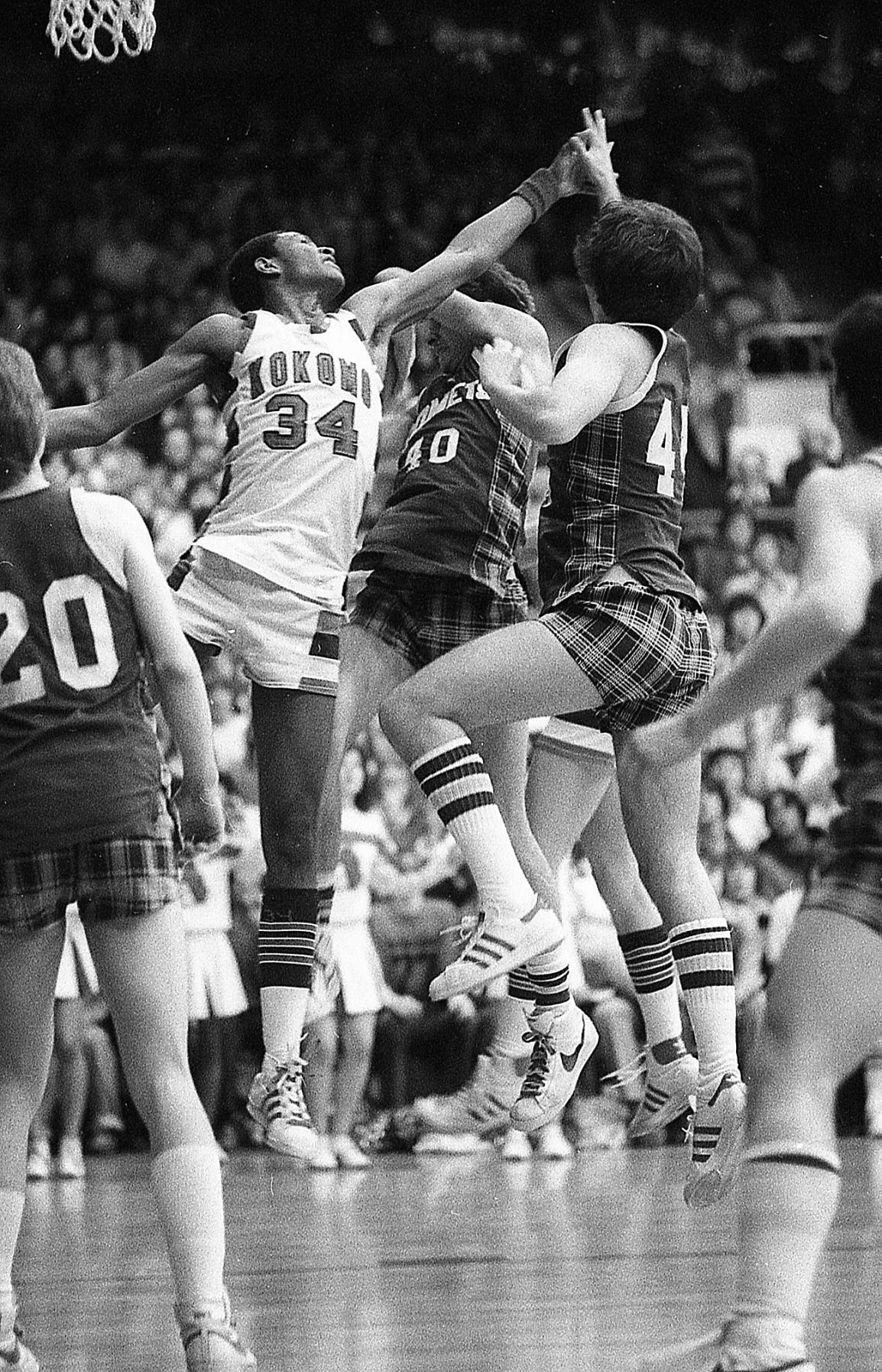 Eastern’s memorable uniforms are shown in this picture from the 1980 Kokomo Sectional championship game on March 7, 1980.

Eastern’s memorable uniforms are shown in this picture from the 1980 Kokomo Sectional championship game on March 7, 1980.

Every one of the points contributing to his school scoring record, now 43 basketball seasons old, occurred before the introduction of the 3-point stripe.

In the late 1970s, Stout, Eastern High School’s smooth-shooting guard/forward, was part of a Comets boys basketball program that would have been equipped to experience deep postseason runs had there been the four-class tournament system of today.

Not that they didn’t almost exit the doors of Kokomo’s Memorial Gymnasium with fragments of net.

From 1977-80, Eastern featured a core of players who factored into some of the greatest and yet most-heartbreaking moments in program history. It was a mishmash of diverse personalities and skill sets, starting with the seniors in 1978 — Terry Etchison, Rex LaRowe, Jerry Jenson and Terry Wilcox.

After that, it was two standout talents each in three different classes.

Along with Stout and his 1,526 career points, the Comets displayed fellow 1979 graduate Dave Eikenberry on the hardwood, 1980 graduates in gritty point guard Ed Marner and post Mark Bjornson and 1981 products Scott Mugg and Ron Sumner.

“All of those teams were pretty darned good,” Stout said. “A lot of the guys were really close friends who ran around together. Everybody knew their role, and we played a lot in the summer on the courts in Greentown and we would go down to Foster Park now and then.”

Running the show was coach Tom DuBois, who, sadly, passed away last April at the age of 78.

“Coach DuBois had been an assistant coach for Bob Macy [at Peru],” said the 5-foot-10 Marner, whose quick hands and toughness on the perimeter had a way of making life miserable for opposing guards. “He was kind of a fundamentals coach. When he came to Eastern, our basketball program wasn’t very good.

“Tom came to change the culture, and, I think, wanted to win a sectional.”

Of course, no rewind of Eastern boys hoops from the Stout-Mugg era would be complete without mention of the team’s road uniforms.

Think shorts that better resembled bathing suits — a green/gold plaid look that was either well ahead of or way behind their time. Whatever the case, Comets players, coaches and fans heard about them virtually every time they played a road game.

Games at Western, Northwestern or, frankly, anywhere else? See above.

The only way to muzzle the opposing crowd was to win, something those Comets did with great frequency.

“Those uniforms were actually from the coach before Tom,” said Marner, a three-sport star who graduated from Eastern with 10 varsity letters having also played football and baseball. “Back then you didn’t get new uniforms all the time.

“A lot of people … there might have been some references about Scotland.”

Marner and Stout agree the road unis of the day were comfortable, if nothing else.

“The very first time I saw them, I thought they were hideous,” Stout said. “I was probably in the eighth grade and saw the varsity wearing them at North Miami. The seniors on the 1974-75 team were the first I saw wearing them.”

Eastern’s attire was unique, for sure. So, too, was its fearlessness regardless of when, where and which program they were playing on a particular night. This was the ultimate departure for a program that was a sectional one-and-done seven consecutive years (1970-76) at the Kokomo Sectional.

However, by the end of the decade, fans throughout Howard County knew the Comets were the real deal.

Marner, who turned 60 two days before Christmas, still wonders what might have been.

“I’ll tell you what, I don’t think I’ve ever gotten over that, especially my senior year,” Marner said. “I think we had Kokomo down nine points going into the fourth quarter and got beat. They started pressing, and we just kind of imploded.

“You have to give Kokomo credit. They did what they had to do to win.”

DuBois coached through the 1981-82 season; again, Eastern squads returned to struggling on the hallowed hardwood of Memorial Gym, losing 10 consecutive sectional games from 1981-90 by an average margin of 15.9 points.

Stout, 62, whose three daughters all graduated from Eastern between 2007-14, figures there will one day be another group of players and coaches talented enough to again catch the community’s collective imagination.

At the same time, he feels fortunate to have been part of something special.

Single-class hoops. Pep clubs. Fan buses. The county vs. city feel at sectional anytime Kokomo or Haworth tipped-off against one of the county squads.

It was what it was, and it was special.