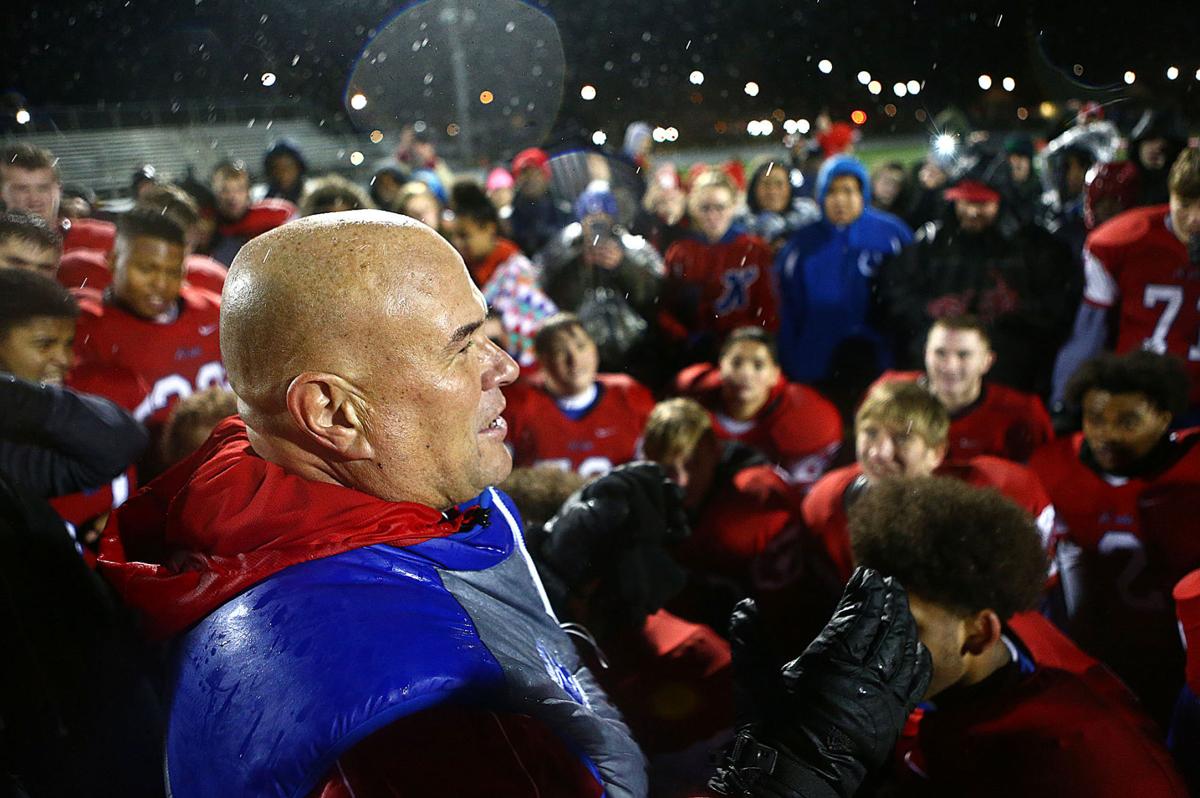 Kokomo football coach Brett Colby talks to his players after the Wildkats beat Michigan City 21-14 in the 2017 Class 5A North Semistate at Walter Cross Field. Colby, who compiled a 90-31 record as Kokomo’s coach from 2007-17, is set for Hall of Fame enshrinement. 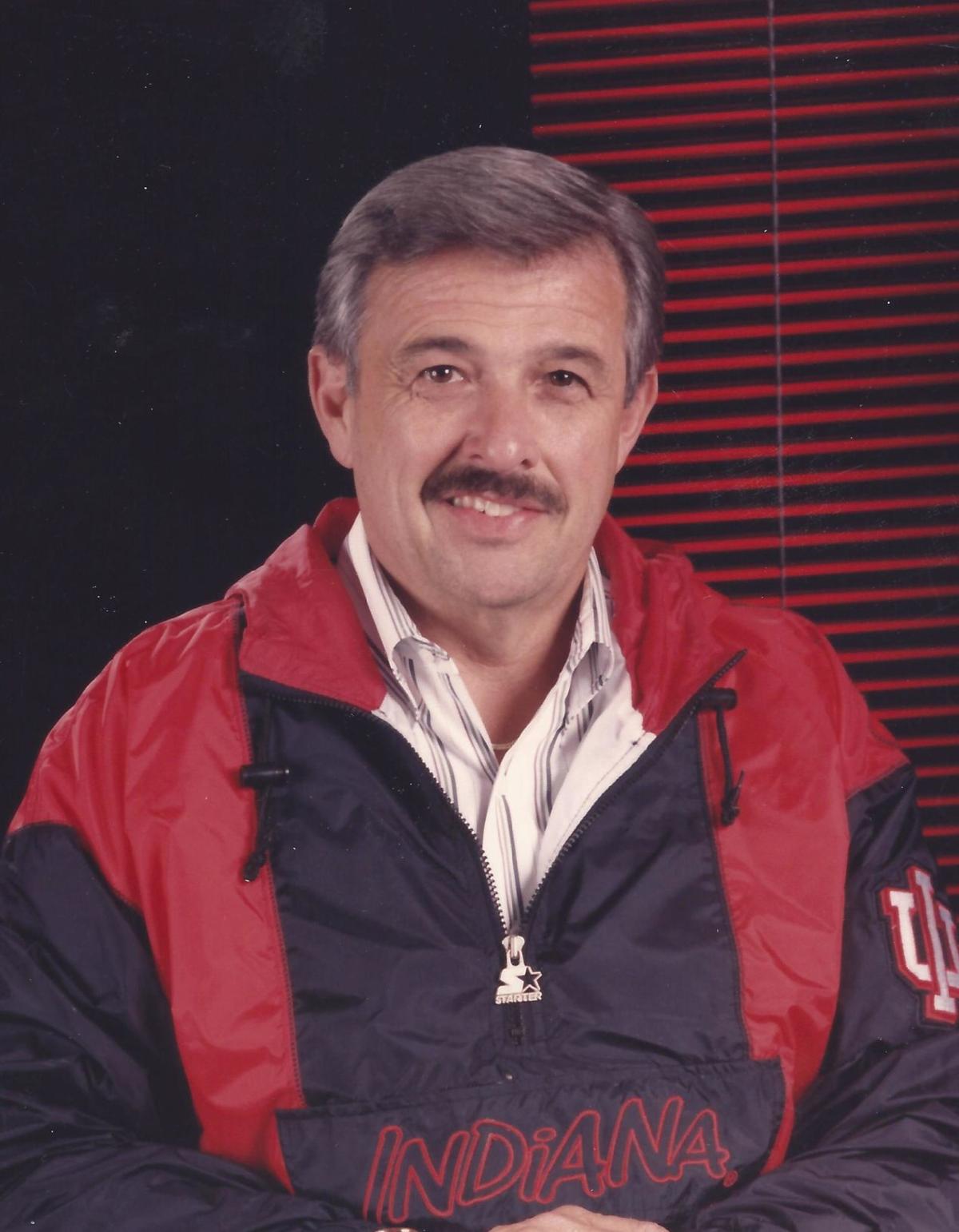 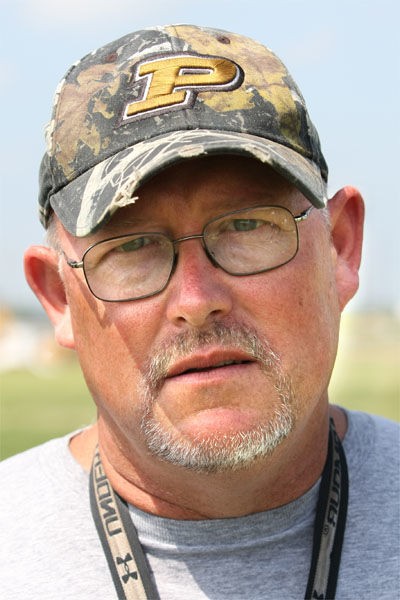 Kokomo football coach Brett Colby talks to his players after the Wildkats beat Michigan City 21-14 in the 2017 Class 5A North Semistate at Walter Cross Field. Colby, who compiled a 90-31 record as Kokomo’s coach from 2007-17, is set for Hall of Fame enshrinement.

On Aug. 20 at the Kokomo-Western football game, Western graduate and former Kokomo coach Brett Colby will have ceremony to welcome him to the Indiana Football Hall of Fame. He will represent two generations of the Colby family as his late father, Ron Colby, a long-time Western assistant coach, also earned a Hall of Fame nod as part of the same 2020 class.

Due to last year’s pandemic uncertainty, the ceremony to honor the Colbys was pushed to 2021.

That connection of father, son and brother-in-law makes the hall enshrinement even more special.

“It really is,” Brett Colby said. “We were over at the All-Star game this past weekend and my mom went over to represent my dad. They actually let my mom flip the coin before the game. It was kind of neat to have her do that, and to have John and my sister [Sherri] there. It was neat to have everybody there together.”

Brett Colby played at Western when Ron was an assistant. When Brett Colby embarked on his head coaching career, Ron joined him as an assistant including a five-year run at Frankfort and 11 years at Kokomo. Brett Colby coached his sons, Austin and Cameron, at Kokomo. He started his career at South Newton and finished with a 205-98 record over 28 seasons.

When Austin Colby got the Maconaquah job in 2018, Brett Colby stepped down from his head coaching position — after taking the Wildkats to the Class 5A state finals in 2017 — and he and Ron both joined Austin as assistants. Ron Colby died in fall of 2018 after Austin’s first season at Maconaquah. Now with Austin as the second-year coach at Kokomo, the Colbys are back with the Wildkats.

“Football’s such a giant part of our family on both sides with Brett and Ron and Austin and Cameron, and my brother [Mark] has coached for 30 years,” Hendryx said. “My dad was on the staff that started football at Winamac. He was the defensive coordinator here for 33 or 34 years.

“When we all got started in this, it isn’t your goal to get in the Hall of Fame, so it’s kind of a cool thing that happened. The timing with Brett and Ron is pretty special too.”

The Hendryx-Colby connection is an interesting tangle. Hendryx is married to Brett Colby’s sister, Sherri, and the two football coaches share a lot of common ground.

“You have that transition time when you come into any family, but once we got to know each other there we’ve been pretty tight ever since,” Hendryx said. “He’s been on my headsets for some of my tournament runs. I was on his headset when Kokomo made their run.”

Their coaching duties mean they rarely see each other coach in person until one gets eliminated in the postseason. But they were in regular contact on Friday nights despite that.

“I don’t have a brother so he was my brother-in-law but we became very close, called each other every Friday night after games and talked for quite a while, shared experiences,” Brett Colby said.

“We never got to coach against each other on the field. It’s been kind of a blessing. The last couple years he was at Knox and we were at Maconaquah, we were in the same sectional and still didn’t square off against each other.”

Enshrinement ceremonies for the Indiana Football Hall of Fame are left up to each individual honoree. Brett and Ron Colby will be honored at the game that brings together the schools they’re most closely linked with, Western and Kokomo.

“We coached over 300 games together in my career so it’s awfully special to be going in with the same group that he is,” Brett Colby said.

Brett Colby asked Western coach Jim Plummer to be on hand Aug. 20 to welcome them in, just as Plummer had Brett Colby speak when Plummer was enshrined into the hall in 2007.

Hendryx’s career included 11 seasons as head coach at Carroll, including the 1995 Class A state title and ‘96 Class A state runner-up, eight years at Northwestern, followed by five at Knox, and then in 2020 he returned home to coach at Winamac. He’s 224-96 in 29 seasons.

Hendryx found out he’d been elected to the Hall of Fame one day this spring.

“I was actually in my office in school during the school day,” Hendryx said. “My brother came knocking on the door of my office. He’s never in the school.”

Seeing Mark at an odd time and location made Hendryx worry his brother was delivering bad news.

“He’s being all somber, ‘I’ve really got something I’ve got to tell you.’ And then he ended up telling me [about the Hall of Fame] so it ended up being pretty cool. He’d talked to the Hall of Fame people and said, ‘Don’t call him. I want to deliver this news.’ It was pretty special.”

Football is shared across the generations in Hendryx’s family as well. In addition to his father and brother being involved in coaching, his son-in-law Blake Betzner is about to begin his first season as Carroll’s coach.

One of the reasons Hendryx went back home to coach Winamac was because his brother was there and Mark has coached with him since then.

“I was very humbled,” Hendryx said of the Hall of Fame selection. “It’s something that I haven’t really thought about much so for him to tell me was very humbling. [I’m] very grateful.”

Getting called to the Hall of Fame is a sobering experience that brings back a lot of memories.

“It was just a real humbling time to think about all the work you put into it, and over the years the great memories and players you’ve coached,” Brett Colby said. “A lot of those things come back to you and you think you wish he [Ron] would have been able to have been around to enjoy it. Hopefully he’s looking down on the 20th and watching the ceremony and watching himself get honored.”

Hendryx had similar memories about the people he’s worked with along the way.

“When you coach as long as I have and were fortunate enough to have some success, it’s not really been because of me,” Hendryx said. “I’ve had great kids and I’ve had great coaches. Anywhere I’ve gone I’ve been blessed with phenomenal assistant coaches and that doesn’t happen everywhere. I’ve been blessed that way and very grateful for all the different people that have helped on this journey. I can’t ever thank them all enough.”