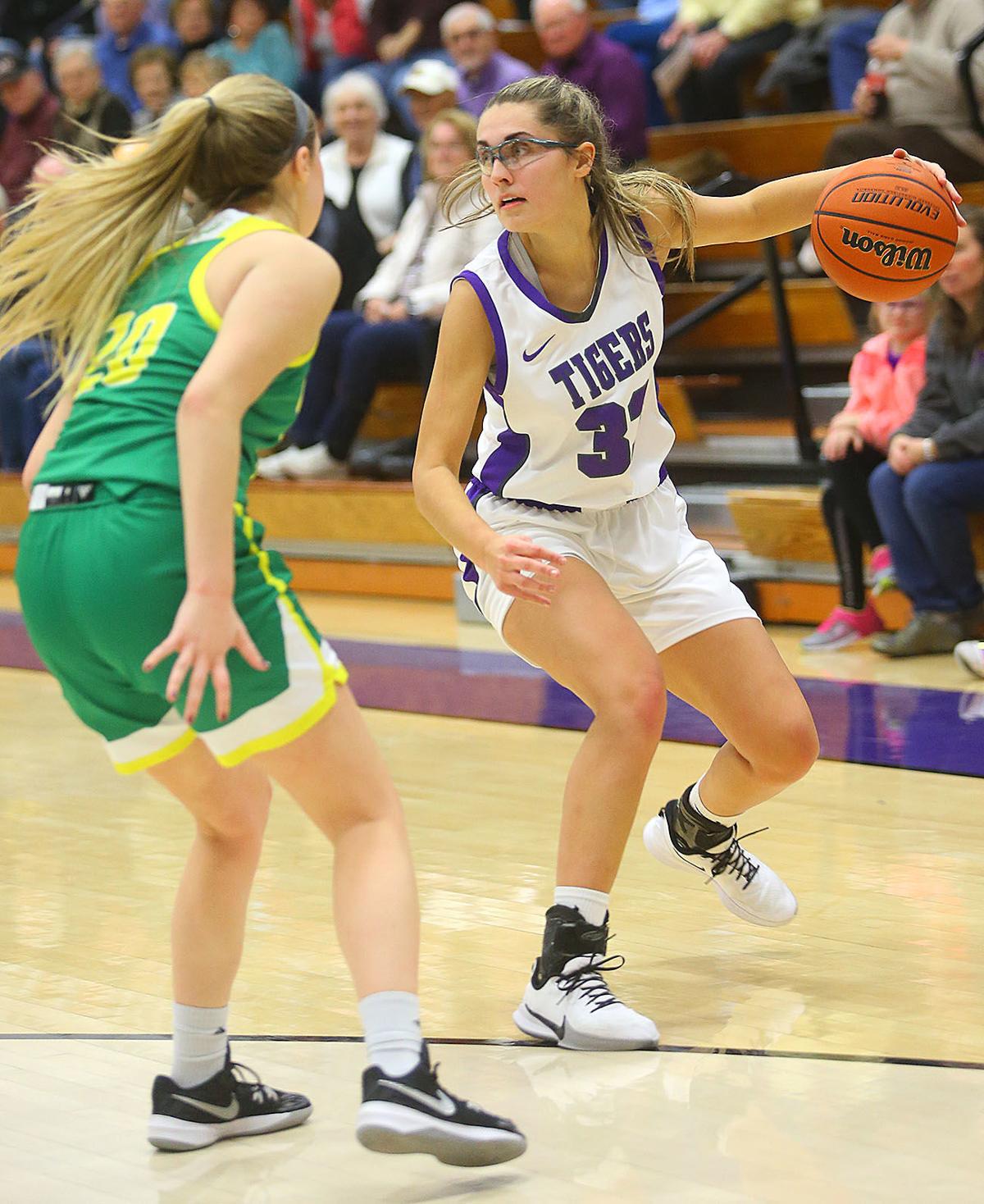 Northwestern point guard Madison Layden handles the ball during the Tigers’ 75-21 victory over Eastern last week. Layden reached 2,000 career points during the game. She is the first player in Howard County history, girl or boy, to reach 2,000. 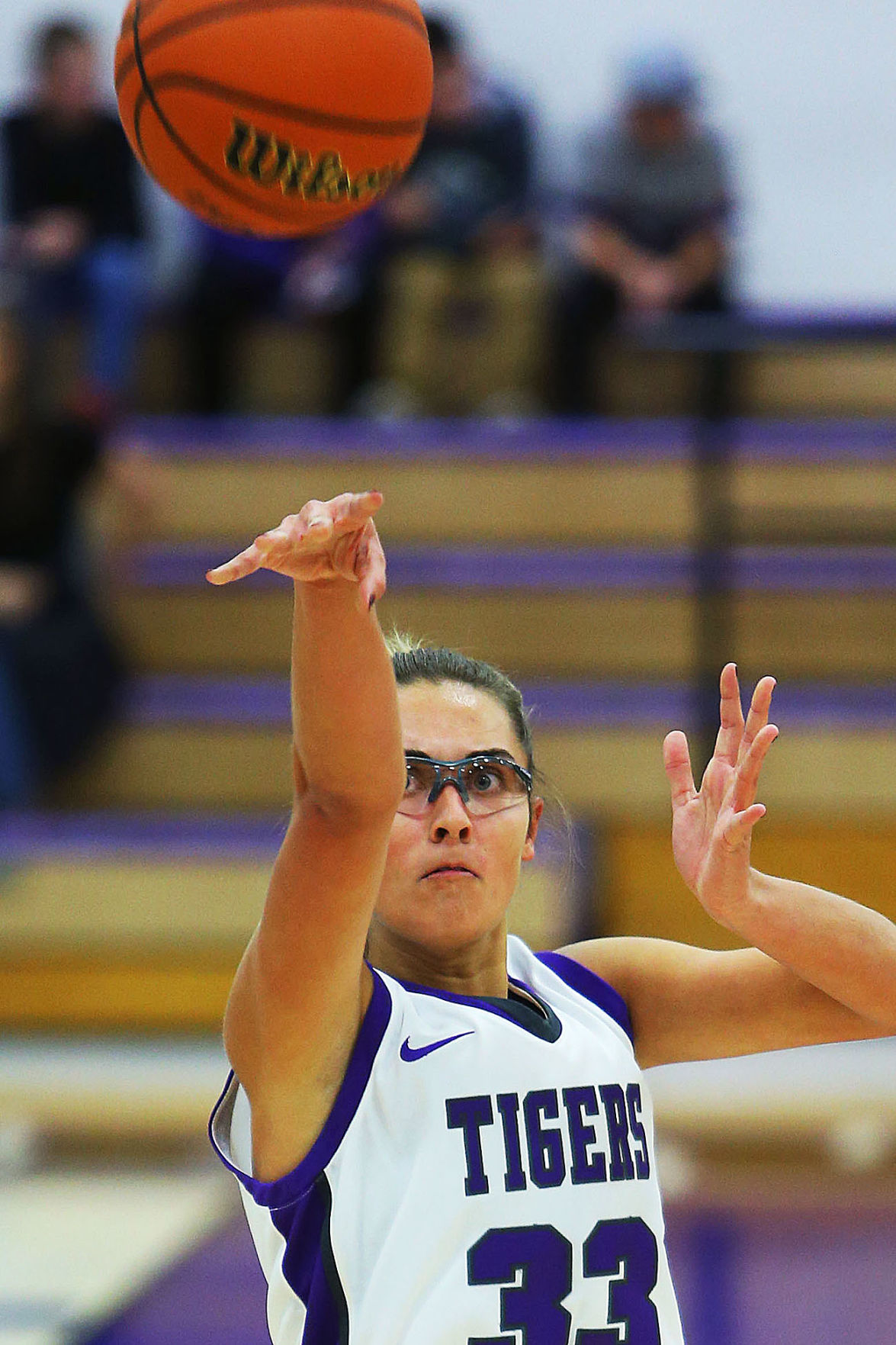 Northwestern sharpshooter Madison Layden shoots a 3-pointer during the Tigers’ 80-28 rout of Twin Lakes on Nov. 9. Entering Monday, Layden was the state’s leader in 3-pointers made with 67 through 17 games.

Northwestern point guard Madison Layden handles the ball during the Tigers’ 75-21 victory over Eastern last week. Layden reached 2,000 career points during the game. She is the first player in Howard County history, girl or boy, to reach 2,000.

Northwestern sharpshooter Madison Layden shoots a 3-pointer during the Tigers’ 80-28 rout of Twin Lakes on Nov. 9. Entering Monday, Layden was the state’s leader in 3-pointers made with 67 through 17 games.

Against Mooreville in Columbus North’s invitational on Dec. 28, the Purdue recruit and Miss Basketball candidate exploded for a school- and tournament-record 40 points. In the process, she moved past former Kokomo great Tiffany Longworth’s record of 1,936 points to become Howard County’s all-time leading scorer.

Two games later, against Eastern last week, Layden became the charter member of Howard County’s 2,000-point club. She scored 20 points in the Tigers’ victory. She followed with 18 points against West Lafayette and 25 against Logansport to push her career total to 2,049.

“My freshman year, I had no idea anyone’s scoring record, anything at all,” Layden said. “Once I scored 1,000 points, I kept seeing the [career scoring] list. It’s just an honor to be able to achieve this because so many great players have played here in Howard County.”

Statewide, she is the 44th girls player to reach 2,000 career points, per the IHSAA’s scoring records.

“We’re so proud of her as a coaching staff and parents and school because it’s not only an honor for her,” said Northwestern coach Kathie Layden, Madison’s mother. “When you receive awards like these, I feel like that’s something that everybody who’s been in the Northwestern program can look at and be proud of.

With Madison Layden and fellow Miss Basketball candidate Kendall Bostic leading the way, the Tigers are 17-0, ranked No. 1 in both the all-class poll and the Class 4A poll and bludgeoning opponents by an average margin of 42.1 points per game.

The goal for the Tigers is another state championship. After winning back-to-back Class 3A state titles in 2018 and ‘19, they are in Class 4A this year under the IHSAA’s success factor.

“Coming off a state championship last year, that’s our goal again this year, but the first step is conference and then we’ll take it one game at a time,” Madison Layden said.

The future Boilermaker is locked in and playing at an elite level.

Madison Layden’s scoring average is up from 21.9 last season. She remains efficient — she is one of the rare players with a 50-40-90 shooting line — but now she’s also shooting more. She started to develop that more assertive approach last summer while playing for the Indy Gym Rats in the prestigious Nike Elite Youth Basketball League.

“My AAU coach always told me, ‘You just have to shoot, Madison.’ I think that’s definitely helped, just given me more confidence this season,” she said.

“That’s something I strive for,” she said, “but I just want to take the best shots I can and distribute the ball to everyone and just keep winning.”

She is all about winning. The Tigers are 95-8 over her career. They could reach 100 before the close of the regular season.

Madison Layden takes all the success in stride. She keeps her emotions on an even keel and focuses on team goals.

“You watch and you see a seriousness,” Kathie Layden said, “but I think a lot of that is her competitiveness coming out. But I also think she comes out like it’s a job sometimes and wants to do her best.”

“It’s an honor to even be talked about as being one of the candidates,” Layden said. “Anything individual after the season, that’s awesome, but for right now, I care about the team so much and that’s my main goal.”