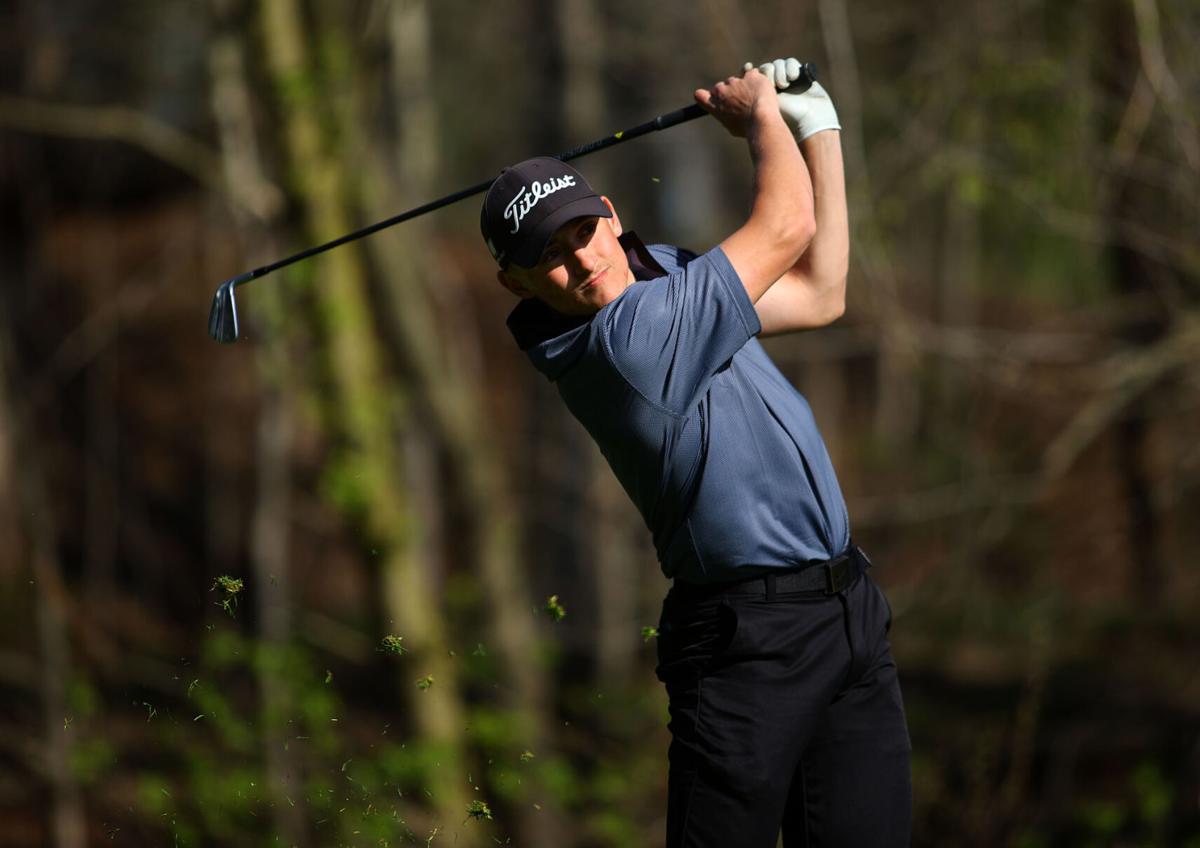 Western golfer Kyle Sanders watches a shot during the Panthers’ season opener against Lafayette Jeff on Wednesday at Chippendale G.C. Sanders was medalist with a 6-over 42. 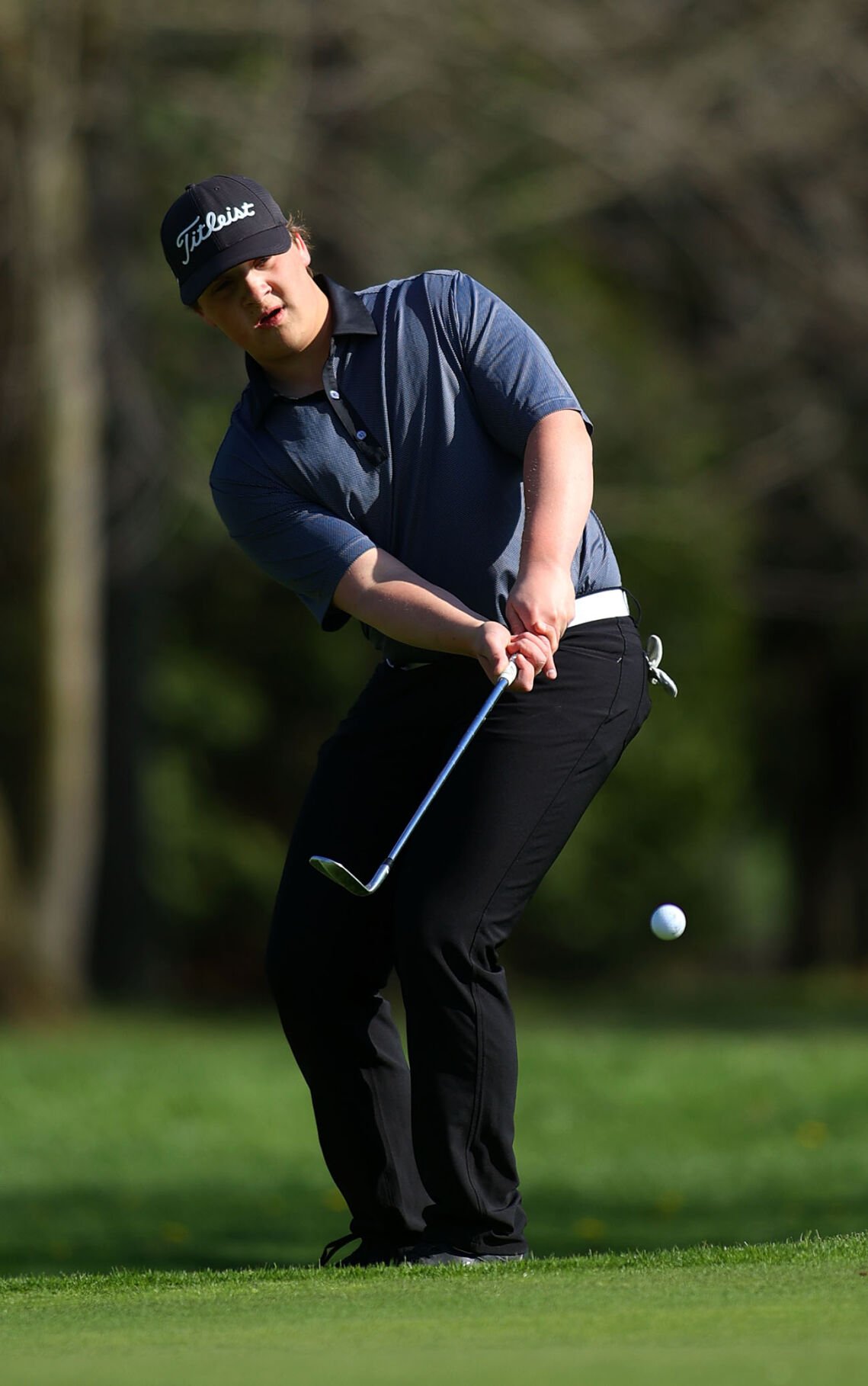 Western’s Andrew Hartman chips a shot during the Panthers’ season opener against Lafayette Jeff on Wednesday at Chippendale G.C.

Western golfer Kyle Sanders watches a shot during the Panthers’ season opener against Lafayette Jeff on Wednesday at Chippendale G.C. Sanders was medalist with a 6-over 42.

Western’s Andrew Hartman chips a shot during the Panthers’ season opener against Lafayette Jeff on Wednesday at Chippendale G.C.

The Panthers’ Kyle Sanders fired a 6-over 42 to win medalist, but the Bronchos came away with the team win in a tiebreaker after both teams shot 194 on Chippendale’s front nine.

Andrew Hartman was second low for the Panthers with a 49 and Sam Bowlby (50) and Kaden Blount (57) had their other counting scores.

Medalist Maverick Conaway led the Blue Devils with a 2-under 33 at Tipton Municipal. Gavin Hare added a 36, Mylan Swan shot 40, and Nolan Swan 41.

“I was very happy with our scores,” Tipton coach Ken Day said.

Conaway is on fire to open the season. The Blue Devil sophomore fired a 4-under 32 in a match Tuesday at Walnut Creek G.C. He had five birdies Tuesday and three more Wednesday.

Following four straight undefeated regular seasons in 2016-19 and the lost 2020 season, Northwestern kicked off a new era with a victory over Hoosier Conference foe Tipton.

“It is great to start out the season with a conference win,” coach Kathie Layden said. “We do not have a single girl on the team with any varsity experience, so to say they were nervous before the match would be an understatement.

“The wind seems to always be a factor in the spring and [Wednesday] was no different, but all the girls really adjusted well and played with a lot of confidence.”

The Comets (1-1) won every point in straight sets to claim their Hoosier Heartland Conference opener.

“Great bounce-back win, and a really good start to the conference out 1-0,” Eastern coach Pat Rice said. “Both doubles improved immensely from our opener. Very happy with how they played.”

The Wildkats scored four runs in the second inning and four more runs in the third inning to build an 8-4 lead in the NCC game at Municipal Stadium. After the Bronchos closed to within 9-6 after five innings, the Kats tacked on two insurance runs in the sixth.

Up 4-1 after two innings, the visiting Comets exploded for 17 runs over the next two innings to break it open as they completed a sweep of the home-and-home HHC series.

Eastern (5-1, 2-0 HHC) finished with eight hits and 14 walks drawn. Reid Keisling and Cam Arcari led the charge. Keisling was 2 for 3 with two home runs, five RBI and three runs and Arcari was 3 for 5 with two doubles and five RBI.

Also for the Comets, Austin Roberts was 1 for 1 with a triple, three RBI and three runs and Cayden Calloway was 1 for 2 with two RBI, four runs and three stolen bases. Calloway pitched 3.2 innings of scoreless relief for the win. He allowed one hit, struck out eight and walked one.

“After a slow start, I thought the offense came to life and we strung together some quality at-bats,” Eastern coach Erik Hisner said. “Cayden Calloway threw the ball extremely well out of the bullpen. It feels good to start the conference slate 2-0.”

TC’s Gabe Fowler had a double.

Western pitcher Mitchell Dean took a no-hitter into the seventh inning, but came away with a hard-luck loss in the Hoosier Conference East Division game at Hamilton Heights.

After Western misplayed a flyball to start the bottom of the seventh, Heights followed with a sacrifice bunt to move the runner to third base. Dean struck out the next batter, but the Huskies came through with a two-out single to score the runner for a walk-off win.

“Mitchell Dean was fantastic on the mound,” Western coach Ryan Berryman said. “He struck out 10, walked one, pounded the zone and attacked their hitters. I was proud of his effort.”

Class 3A No. 4-ranked Western (3-3, 3-1 HC East) had only two hits, singles by Deaglan Pleak and Mitchell Knepley.

One night earlier, Western beat Heights 11-10 in walk-off fashion, scoring nine runs in the bottom of the seventh.

Northwestern ace Cole Wise was perfect through five innings, but Peru rallied for two runs in the bottom of the sixth to take the lead and went on for the win, giving coach Chuck Brimbury his 300th win with the program.

Mathew Roettger led off Peru’s sixth and was hit by a pitch. After Cooper Baldwin followed with a bunt that Northwestern misplayed, Kade Townsend delivered a hit to left field to score the tying run with Northwestern cutting down Baldwin at the plate. Andrew Beebout’s RBI single put Peru ahead.

Peru pitcher Leif Astrup tossed a complete game for the 6-0 Bengal Tigers. He struck out 11 and walked one.

Wise finished with 12 strikeouts and no walks over his six complete innings. He fired 64 of his 77 pitches for strikes.

“A dominant performance by Cole. We coughed it up in the sixth with mistakes,” Northwestern coach Ryan Ward said. “We out-hit them 8-2, we just couldn’t knock them in. We had too many strikeouts with runners on base.”

Cole VanNatter went 3 for 4 with a double for Northwestern (2-2). Wise had a double and Tate Mullens drove in the Tigers’ lone run.

Tied 1-1 through three innings, Delphi scored nine runs in the bottom of the fourth to break away.

Taylor coach Kris Dill said the Titans had mental mistakes in the field in the inning and the Oracles capitalized.

“Our guys kind of got caught up in the moments of pressure and it fell apart from there,” he said. “But it was a good game for us all the way up to that point. We had a lot of positives. I’m not one to sugarcoat it, but it was much better [than Tuesday’s loss to Delphi]. That score is not indicative of how we played [Wednesday]. We made some progress. We cut down on errors.”

“He did great,” Dill said. “He had three walks and one strikeout so he just threw strikes so our defense had a lot of chances and they made every play they were supposed to make through three innings.”

Jaci Elson went 4 for 4 with three doubles and three RBI and Bailey Henry cracked a grand slam to highlight the Tigers’ 20-hit explosion.

Harrison pitched all five innings. She held the Warriors to three hits, struck out five and walked none.

Kokomo led 3-2 through four innings but Zionsville scored three to take a 5-3 lead in the fifth. Kokomo tied the game with single runs in the top of the sixth and seventh but the home side won it with a run in the bottom of the seventh.

For Kokomo (4-2), Kennedy Huckeby was 2 for 4 with two doubles, Brooke Hughes was 2 for 3, Janessa Reece homered, and Sarh Stonebraker doubled. Pitcher Gwen Hand took the loss.

“Unfortunately we gave this one away,” Kokomo coach Mike Susong said. “We had three defensive errors, two baserunning errors, and really we’re lucky for it to have only been 6-5. We can’t make those kind of mistakes and expect to beat good teams.”

Kyndal Silcox went 4-for-4 with a triple, four RBI and three runs scored for the Kings. Paxtyn Hicks went 4-for-4 with a double and four runs scored. Kelsey Roller went 3-for-3 with a grand slam and six RBI total. Hannah Plauschin went 3-for-3 with a double and two RBI. Rylee Holt had a double, single and RBI. Madi Dormer had two hits and was the winning pitcher.

Delphi beat visiting Taylor to complete a sweep of the HHC home-and-home series.

“Better showing [Wednesday], we got better and it showed on the field,” Taylor coach Robert McGuire said. “We must keep putting our best into the game and it will all come together.”