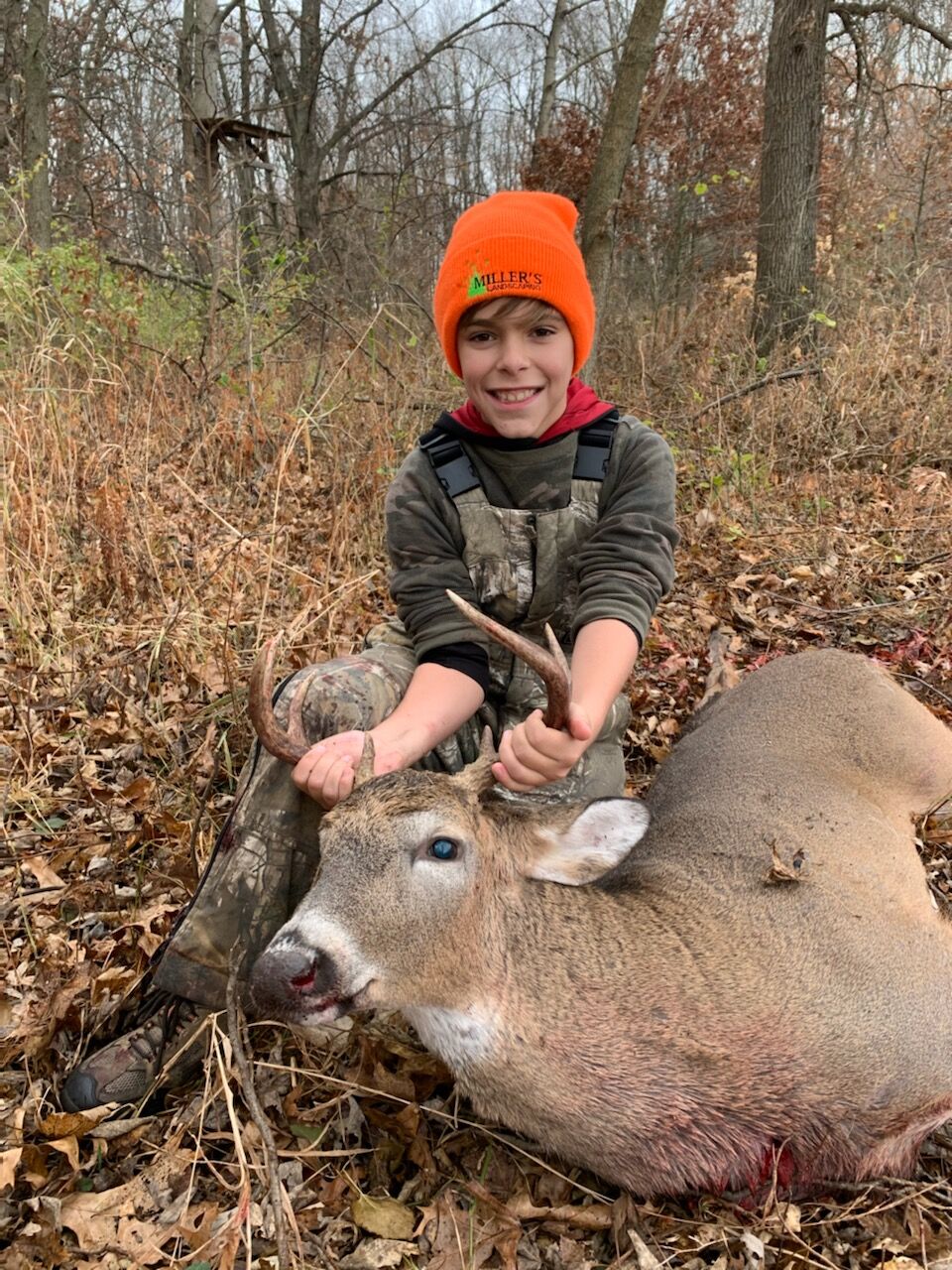 Brecken Sebura, 11, poses with his first buck, which was taken during this year’s regular firearms deer hunting season.

Brecken Sebura, 11, poses with his first buck, which was taken during this year’s regular firearms deer hunting season.

First off, I would like to congratulate all those who have seen success during this year’s celebrated deer hunting seasons. And for those who haven’t, congratulations to you too for being a necessary participant in one of our nation’s most timeless traditions.

For over three decades I have tried to highlight the accomplishments of others, however this year’s deer season was extra special for me personally. Here’s why.

I was sitting high up in a stately oak, daylight still 30 minutes away. Its branches extended out like the arms of a coddling mother. A gentle breeze rustled the leaves not yet ready to make their descent to the forest floor. It was the opening day of the firearms deer hunting season.

For me, the early archery season is a solitary affair, normally hunting alone. But during the firearms season a special group comes together consisting of my sons Joseph and Anthony, son-in-law Robert and brother Jim. Each year we make an effort to introduce a newcomer to the traditional activity which in past years has included other family members and friends.

This year was made special by the inclusion of my grandson Brecken. He was excited, exuberant and still contained a bit of that youthful restlessness. During prior weeks we had spent time together going over firearms safety measures, clothing needed and deer biology.

As darkness slowly gave way to the first wisps of daylight each noise was met with a renewed curiosity. His boyhood imagination had conjured up the notion that deer would arrive at this exact location at a precise time, otherwise why would his dad and grandpa have him sitting at this particular spot on opening morning? If only it were that simple.

As he would find out, deer have no schedules or timetables. They come and go as they please. Patiently waiting for the unknown is a blessing rather than a curse.

It didn’t take long before deer started materializing in the field he was overlooking. “Here’s comes a buck,” said his father Robert, as a fat seven-pointer slowly moved his direction. Although I was hunting another area of the property, I was thankful for the play-by-play accounts offered up through texts.

I hoped, no prayed, that Breck would collect his first buck. Patience is a virtue, especially in the hunting world and he exhibited a good amount as he waited for the best opportunity. The buck continued to close the distance and only when it stopped, standing statuesquely still did he shoulder his rifle.

“Take him when you are confident,” his father whispered.

“Please,” I said to myself silently, hoping he had made a good shot and would soon collect his first deer.

“Breck just got a buck!!” read the text which soon followed.

It wasn’t long before I began making my way to their location. It was one of the few times I saw my grandson emit so much emotion. He gave me a play-by-play account of what happened.

“This was the best thing that has ever happened to me,” he said looking down at his buck.

No words could have meant more.

The pure excitement of helping, watching a youngster take their first deer, whether buck or doe, is something only a hunter would know. It’s not about size or number of points and never should be. Even though this will more than likely be the first of many bucks he will take during the course of his lifetime, none will be more special. Hopefully those antlers will hang proudly in his home as any buck he will ever collect.

“My how things have sure changed,” I thought later while reflecting on the morning’s success, thankfully, at least for me, the same exhilarating heart pounding still returns when a large buck suddenly appears. However, I am concerned this may no longer be the case for a large sector of the hunting public. In our ever widening thirst for knowledge, and passion for technology, is deer hunting becoming solely based on pure science and technology?

Let’s face it. Many of us know how to locate core areas, decipher a rub line, make mock scrapes, score a deer on the hoof to within 10-inches and rattle in bucks to within spitting distance. Our knowledge is unprecedented and our gear is unsurpassed.

But in the process are we losing something of intrinsic value? Are we slowly losing the wonderment only the land beyond concrete and asphalt can offer? After all, why learn to age a track when your trail cam picture has the date, time and moon phase stamped on it?

To me, deer hunting is a game that cannot be won, only played and how it’s played will determine your ultimate satisfaction. If we shot a deer each time out, much of the mystery and romance would be eliminated and the activity would be reduced to another mundane job.

In the traditional activity of hunting, especially deer, we must have the wonderment and mystery of the unknown to capture our hearts and keep us coming back for more.