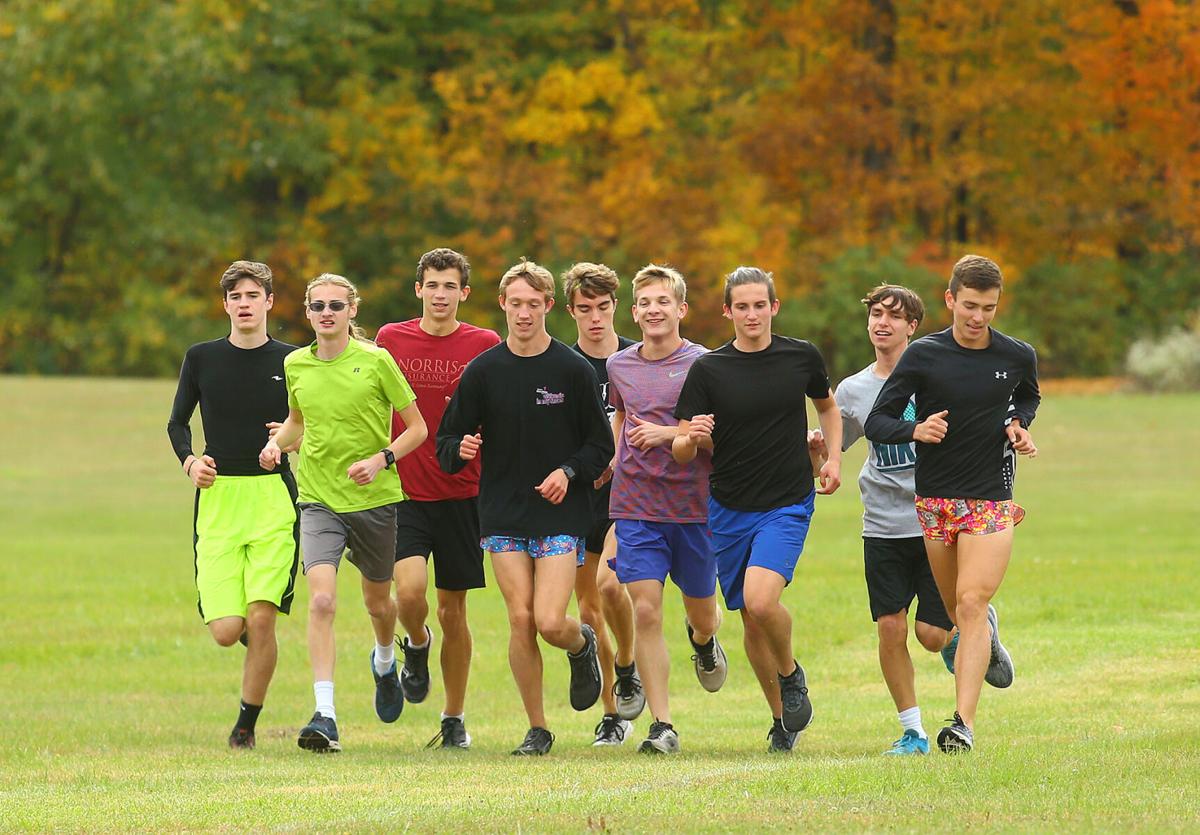 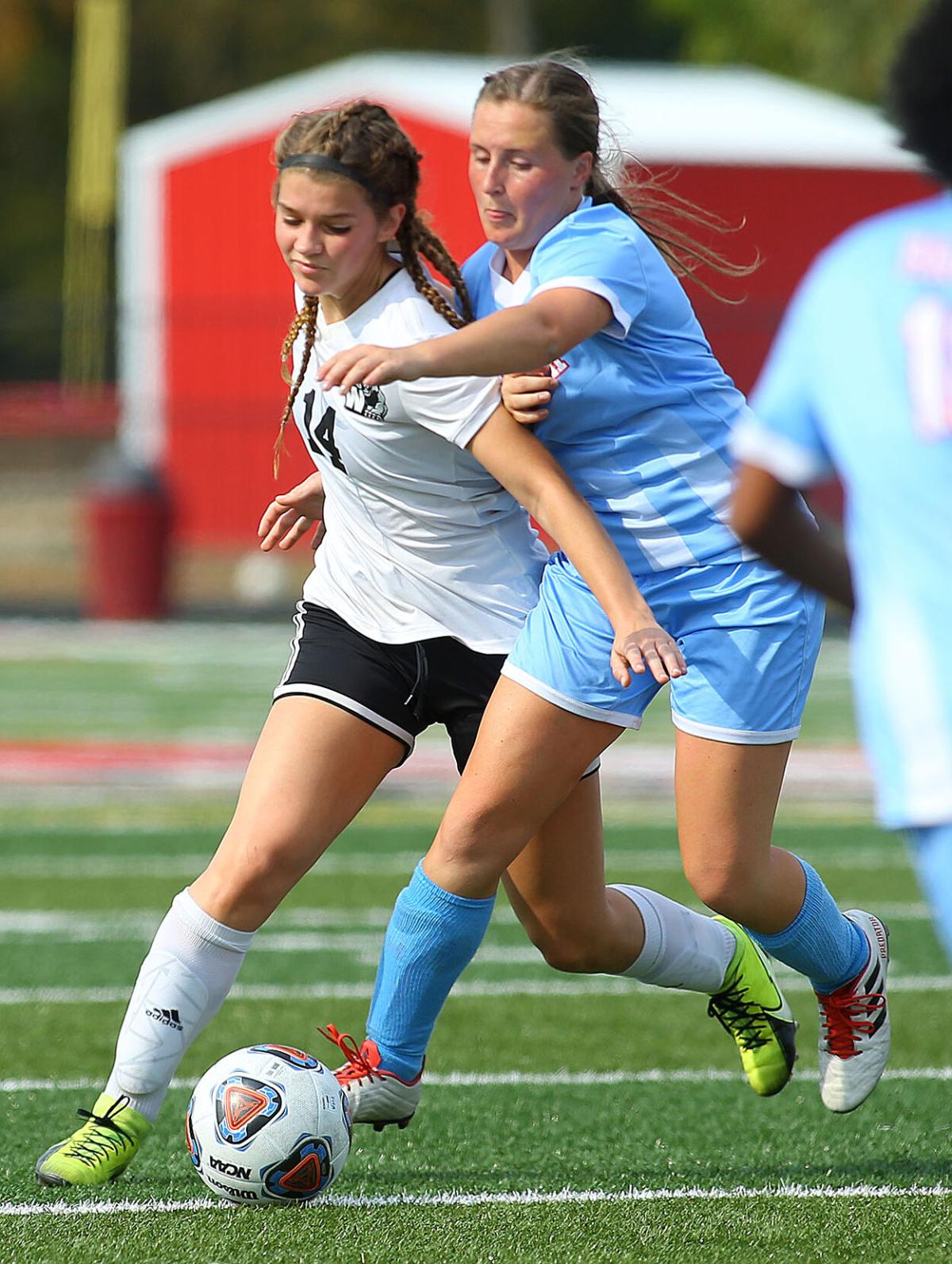 Western’s Abigail Fouts, left, and Maconaquah’s McKenna Wilson go after the ball during the Class 2A Mississinewa Sectional championship on Saturday. The Panthers won 5-0.

Western’s Abigail Fouts, left, and Maconaquah’s McKenna Wilson go after the ball during the Class 2A Mississinewa Sectional championship on Saturday. The Panthers won 5-0.

There’s no shortage of familiarity or motivation on Saturday when local squads take aim at regional competition in cross country and soccer.

Western’s boys cross country team won the Logansport Sectional last Saturday. Next up is the regional, and perennial champ Warsaw. The Tigers have won eight straight regional titles and are the measuring stick for all contenders. Western was fourth last season and hopes to mount a challenge this season.

In soccer, Western’s girls team and the Tipton girls team are both in the regional. The Panthers head to Class 2A Marion Regional, where Fort Wayne Bishop Dwenger awaits. Dwenger knocked Western out of the last two regionals.

For Tipton, Eastbrook awaits in a Top-10 clash at the Class A Northwestern Regional. Eastbrook knocked Tipton out of the regional last year in an eight-goal thriller.

Western started generating momentum two weekends ago when the Panthers dethroned West Lafayette at the Hoosier Conference meet, snapping West Side’s 24-year run of league titles. Then the Panthers surged to the title of the Logansport Sectional with a thrifty score of 21.

They look to keep picking up the pace Saturday morning at the Logansport Regional.

Joining the Panthers in the regional are the next four squads from the sectional, Eastern, Carroll, Northwestern and Peru, as well as the five qualifiers from the Manchester Sectional — Warsaw, Culver Academies, Plymouth, Manchester and Rochester. Western’s last regional title was in 2008.

“We want to run as well as we possibly can and keep the momentum that we started two weeks ago at conference,” Western coach Gary Jewell said. “I’m not sure how close it’s going to be between us and Warsaw.”

“Honestly [the Panthers] stack up really well [with Warsaw],” Jewell said. “Everything I’ve seen says Brayden is the guy to beat. Actually, the guy who won the Culver Regional a year ago is back, but Brayden I think, looking at what he ran in conference, is probably the favorite to take that top spot. Their No. 2 guy and Joseph Packard are in a similar area, and then after that it spreads out.

“I’ve looked at it a number of different ways and it could be anywhere from a couple points either way to eight or 10.”

Western’s team time at the sectional was 1:26:02 and the gap between the first and fifth Panthers was just 43.1 seconds as Western put 83 points between itself and second place.

Jewell said getting that kind of a narrow gap between first and fifth runners, and posting a good cumulative time are important. Additionally, if Curnutt and Packard can contend at the front again, that can pull the team up the standings.

“That’s huge. If we can have those guys pull off a 1-2 like that, that’s tremendous,” Jewell said. “I think back to 2014 in sectional, Winamac did that to us and they won by six points at sectional. [If you can do that] you’ve got a really good [chance] of if not taking the top spot, at least you’re in the race. And for us having our 3-4-5 guys a half a second apart … we need to improve on their time a little, but you can’t fault those guys being that competitive coming in.”

Area runners who qualified for the regional as individuals include Maconaquah’s Isaiah Wittenberg and Kaden Miller, Kokomo’s Collin Keesling and Bryan Stoltzfus, and Cass’ Enoch Hines.

The top five boys and girls teams, and top 10 individuals not on an advancing team qualify for the New Prairie Semistate.

Northwestern freshman Hannah Moore was the Logan Sectional champ. Kokomo’s Julynne Spidell was second at the sectional. Moore and Spidell qualified for the regional as individuals along with Northwestern’s Ella Deck and Eastern’s Ella Kantz and Emily Slaughter.

Tipton’s girls soccer squad faces the team that knocked the Blue Devils out of the tournament last year when No. 8 Tipton (11-3-2) meets No. 4 Eastbrook (10-4-1) at noon in the Class A Northwestern Regional semifinals. Eastbrook beat Tipton 5-3 last year in the same round.

“To us it’s sometimes harder going in blind, but knowing you don’t get to play them in the season, but playing them the year before is almost as good,” Tipton coach Taylor Heard said.

Tipton went into last year’s regional game with just 12 players. This season’s squad had an infusion of a dozen freshmen and has 23 players on the roster. The 11 returning Blue Devils have experience to draw on and the freshmen give Heard a wealth of depth. They’ll need both if they’re to beat Eastbrook.

“I think [the Panthers] have a good offensive front,” Heard said. “I think that we were able to hang for the first half last year, but like I said we only had 12 players for that regional game, so we just ran out of steam. I think our defense is better this year than last year and we have numbers that can pop up in relief when we have to.

“That experience of coming in [to the regional round] in the second year in a row will be the deciding factor in how we play.”

The championship is Saturday at 7 p.m.

Western (9-8-2) faces No. 10 Fort Wayne Bishop Dwenger (13-1) in the 10 a.m. semifinal of the Class 2A Marion Regional. Dwenger beat Western 5-1 in last year’s regional final on the way to finishing as state runner up. In 2018 Dwenger beat Western in a penalty shootout after their regional opener finished scoreless.