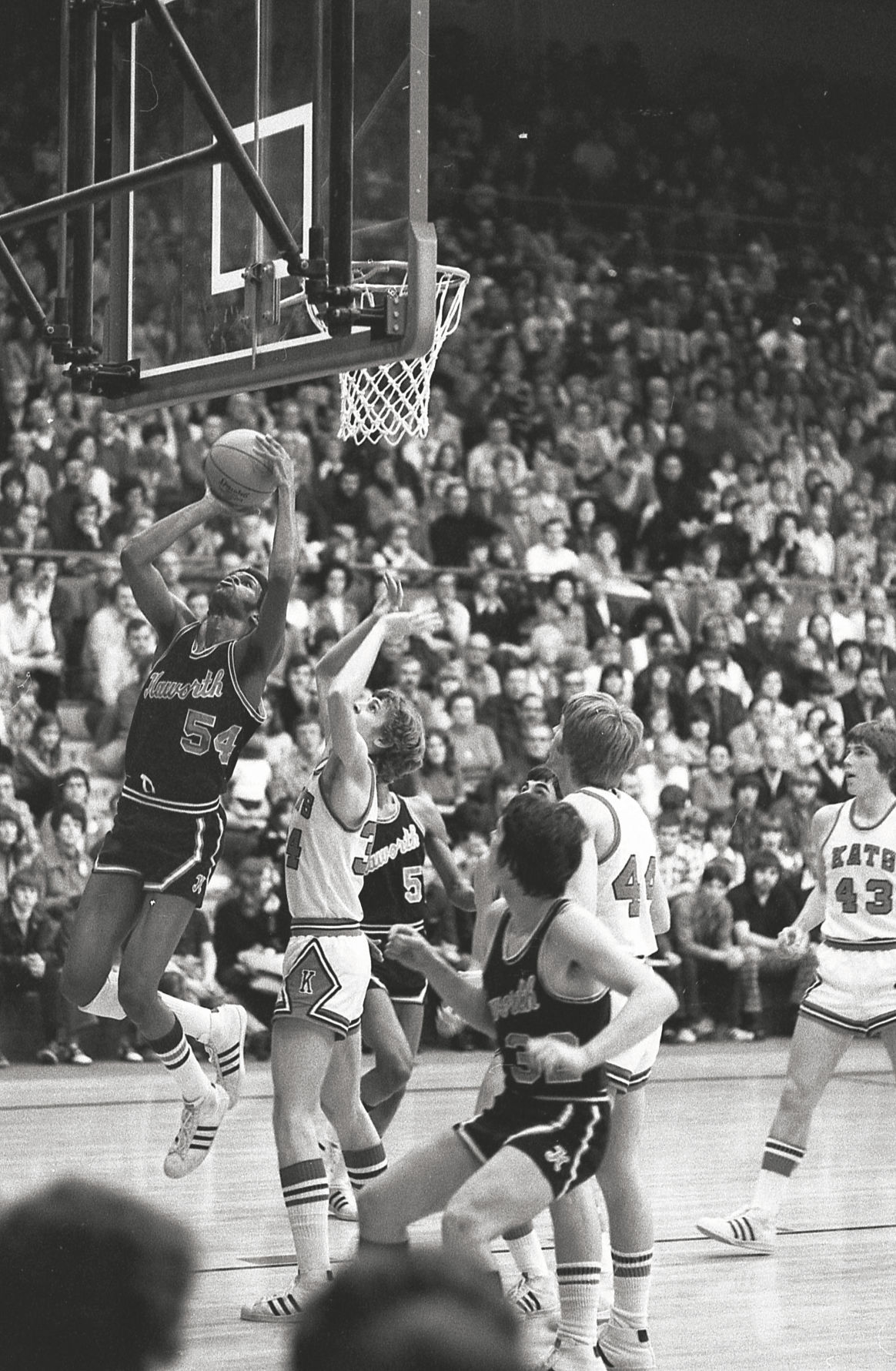 ROUND 1: Haworth’s Mark Embry puts up a shot during the regular season game between Haworth and Kokomo on Feb. 1, 1975, in a packed Memorial Gym. The Huskies won that game, but the Kats earned payback later that month in the Sectional semifinals. 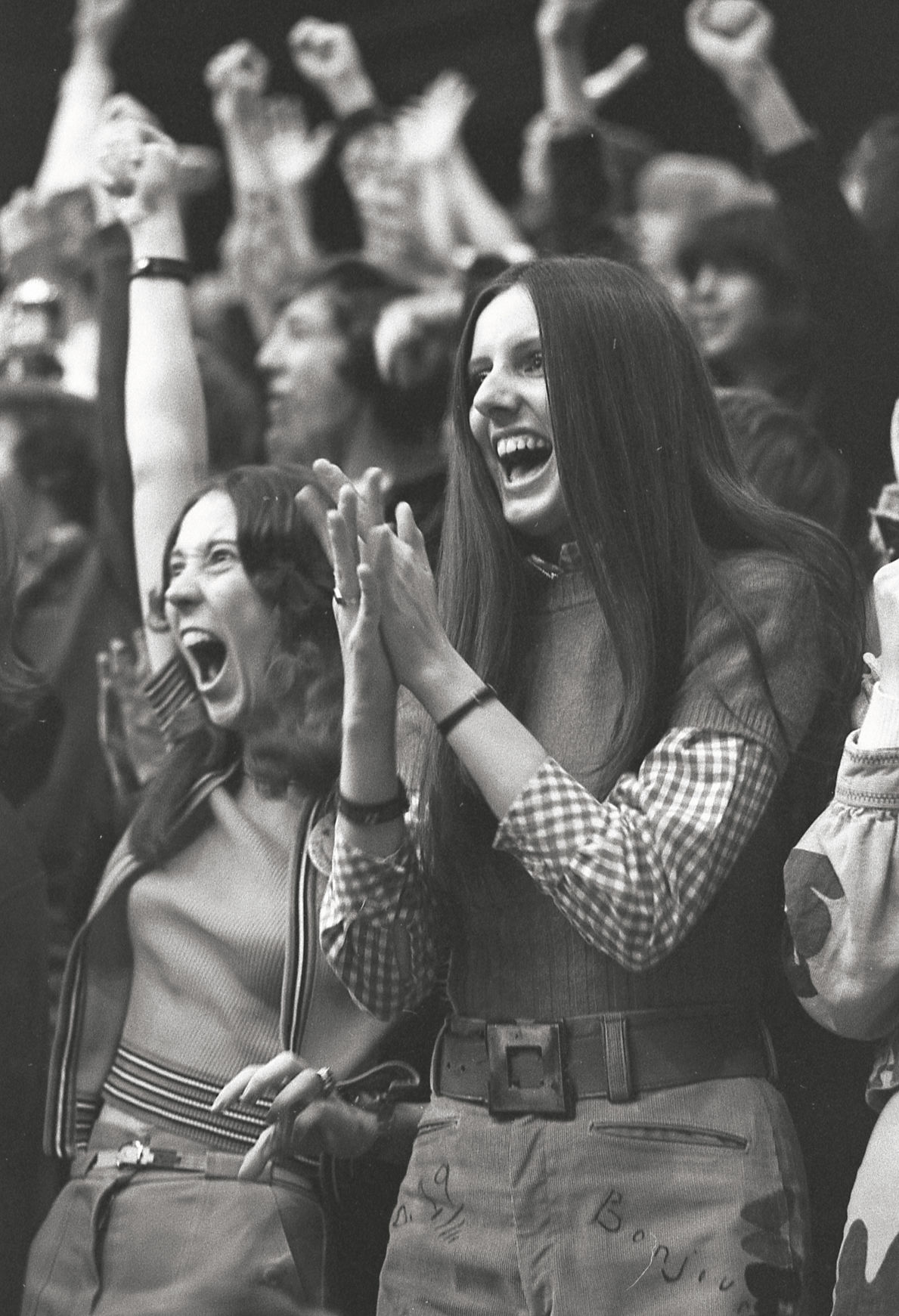 HOOSIER HYSTERIA: Fans are shown during the regular-season game between rivals Haworth and Kokomo on Feb. 1, 1975.

ROUND 1: Haworth’s Mark Embry puts up a shot during the regular season game between Haworth and Kokomo on Feb. 1, 1975, in a packed Memorial Gym. The Huskies won that game, but the Kats earned payback later that month in the Sectional semifinals.

HOOSIER HYSTERIA: Fans are shown during the regular-season game between rivals Haworth and Kokomo on Feb. 1, 1975.

Years ago — 1975 to be exact — the unbelievable happened. The Kokomo High School mascot, kept under lock and key at Memorial Gymnasium, vanished without a trace!

As the story unfolded, it became even more unbelievable. A group of Haworth High School students, using the old military tactic of a false flag, wearing K sweaters, kidnapped our sacred Wildkat. Even more amazing this was done while school was in session.

KHS students were everywhere on campus, but no one noticed these were not KHS students wearing K sweaters. No one noticed or thought it odd the Wildkat mascot was being loaded onto a pickup truck. This event took place right before the annual crosstown rivalry, regular-season basketball game between the two schools.

The taking of the Wildkat mascot was big news at KHS. Bigger than the Lindbergh/Patty Hearst kidnapings. The taking of the mascot energized the Haworth community, which helped propel Haworth to a regular-season victory.

A near-capacity crowd was on hand to watch the matchup. Haworth had a talented team in Mark Embry, Darryl Brown, Brad Brinson, Rod Harris and Mike Maddox. Kokomo’s starters were Tim McFarland, Phil Thatcher, Tim James, Tico Brown and Kevin Abney. The Kats led 35-26 at halftime. The third quarter was almost even with Kokomo holding a 47-41 lead. In the fourth Haworth outscored Kokomo 26-14 although it was close the entire way.

Haworth led 65-61 with :14 left. The Wildkats could not turn this one around and fell to Haworth 67-61. The Wildkats dropped to a disappointing 8-7 record. But as in times past coach Carl McNulty would figure out how to get the Wildkats re-energized and focused. The Wildkats rattled off five straight wins to close the regular season at 13-7 And for the third straight year a Wildkat (James) won the NCC scoring title.

In the sectional tournament Kokomo stopped the Western Panthers in the opener, 76-53. Now the Kats would face the Haworth Huskies in round two. With a near-capacity crowd on hand, everyone except Kat fans would be stunned!

Kokomo wanted payback for the taking of the Wildkat mascot. The Kats bolted to a 25-7 first-quarter lead. The Kats’ level of play was unreal. Kokomo outscored Haworth 33-14 in the second quarter for a 58-21 lead at halftime. By the end of the third it was Kokomo leading 81-38. With both benches cleared in the fourth the final was Kokomo 93, Haworth 62. A payback indeed.

That is where this story should have ended. Right? But then toward the game’s end, the Northwestern cheerblock stood up and cheered. “Huskies, Huskies don’t be blue. We’re going to get those Kats for you.” The Northwestern Tigers had entered the fray.

The sectional final was Hoosier Hysteria at its best. The Wildkats would face the only unbeaten team in the state. The state-ranked, 21-0 Tigers had Brian Hudson, Rick Crawford, Randy Crow, Craig Sutherland, Tom Orem, Steve Sewell, Tony Fleming, Pete Hahn and John Fenn.

A capacity crowd of 6,800 hysterical fans were on hand. The Kats bolted to a 21-10 first-quarter lead. The Kats were playing balanced, calm and smooth while Northwestern was anxious and rushing its plays. In the first half Kokomo out-rebounded Northwestern 27-14. Kokomo led at halftime 39-20.

Late in the third quarter, Northwestern again slipped behind by 19 by a score of 55-36. This is when the Tigers’ Hudson scored two free throws and a jump shot at the buzzer to cut the Kats’ lead to 55-40. Hudson’s jolt was what the Tigers needed, as they now would make a run. Orem, a 6-foot-7 center, came to life in the fourth and helped cut the Kat lead to seven at 59-52 with 3:00 left.

At the 1:30 mark the Kat lead was still at seven 63-56. The Tigers would not score again. Kokomo’s Brown hit two free throws with 1:15 left as the Kats increased the lead to 65-56. A Kat stall and more free throws closed out the game with the Kats winning 68-56 over the previously unbeaten Tigers.

A lot of intangibles determine the outcome of any basketball game. This is especially true during the Indiana high school tournament. One can only speculate what effect the taking of the Wildkat mascot and the taunting cheer made by the Northwestern Tigers cheerblock had on these three games played. One thing was for certain: The Coach McNulty led Kokomo Wildkats were sectional champions once again.

Scott Spires may be reached by email at harvestskyenergy@yahoo.com.