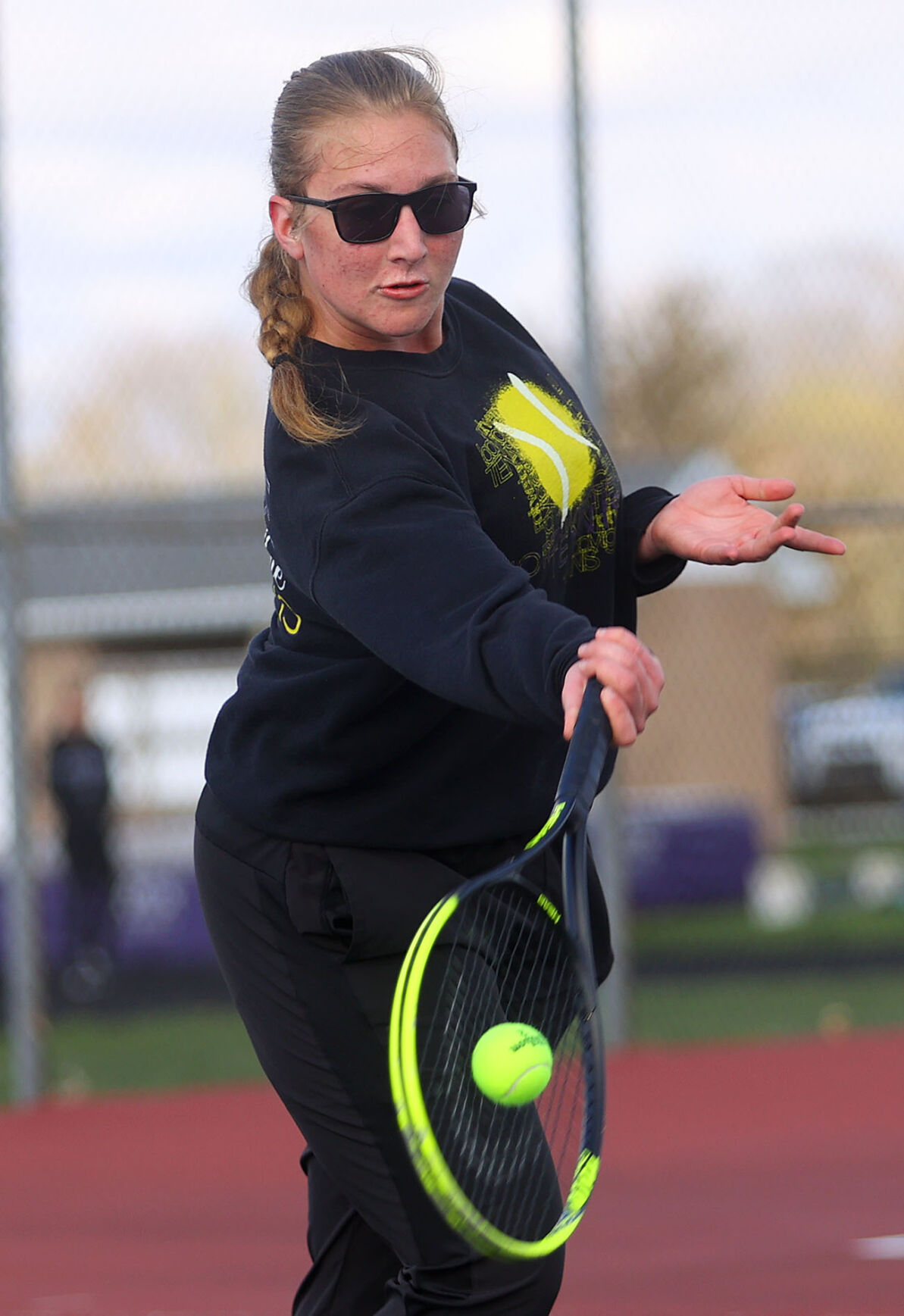 Northwestern No. 2 singles player Kat Grube returns a shot during the Tigers’ match against Eastern on April 15. Grube has helped the new-look Tigers continue their winning ways. 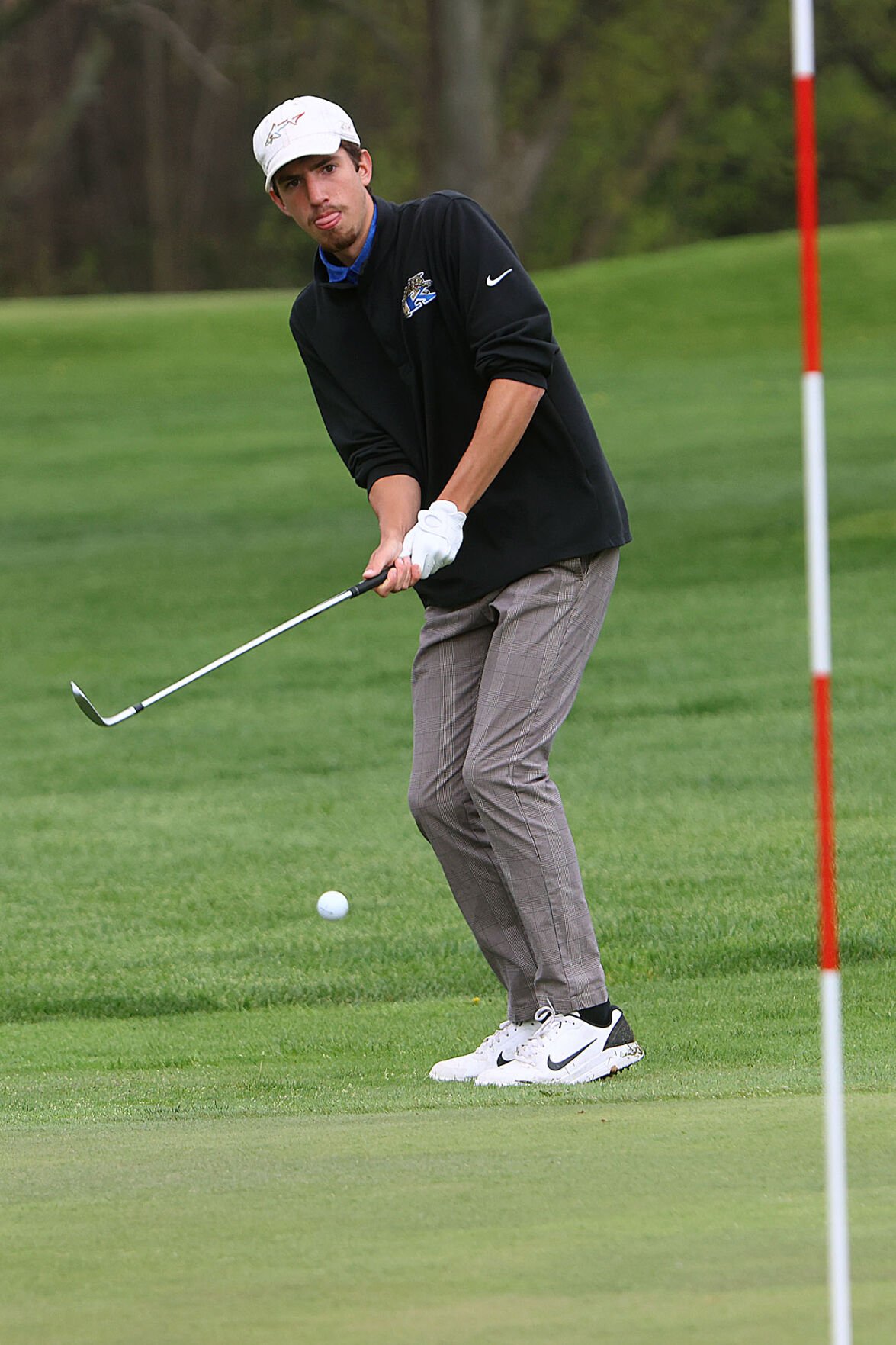 Kokomo golfer Ty Lauderbaugh chips a shot during the Kats’ match against Peru on April 29 at the Country Club.

Northwestern No. 2 singles player Kat Grube returns a shot during the Tigers’ match against Eastern on April 15. Grube has helped the new-look Tigers continue their winning ways.

Kokomo golfer Ty Lauderbaugh chips a shot during the Kats’ match against Peru on April 29 at the Country Club.

With no 2020 spring high school sports season to build on or gauge progress, the 2021 season was bound to be hard to predict.

A few teams, like the softball squads from Northwestern and Eastern, had a lot of experience coming back and it was safe money they’d be strong this season. Some others have been pleasant surprises, and at least one of this season’s pace-setters came out of the blue.

Here’s a look at some of the unexpected leaders so far this season.

From 2016-19, the Tigers went undefeated in the regular season and won the Kokomo Sectional each year. They had a veteran squad for 2020 before the COVID shutdown ended the IHSAA spring season just as it was about to begin.

The Tigers returned this season with an entirely new lineup and have barely missed a beat, going 7-0 in dual matches.

“I wouldn’t say that I am surprised with the success these girls have had because quite a few are multi-sport athletes who know how to compete,” Northwestern coach Kathie Layden said. She also coaches the Tiger girls basketball and volleyball squads. “They have been around a lot of the success we have had in the past as well, and saw the hard work that kids put in to have success.”

McKenna Layden, Kat Grube and Avery Rooze have taken over singles play, while the teams of Jennah Jones and Mary Babcock, and Emily Goltz and Anna Grube handle doubles.

The Goltz-Anna Grube tandem is 10-0 on the season. Kat Grube and Rooze are each 8-1, and at the top of the lineup, McKenna Layden is 7-2.

“The girls have great attitudes and come to practice ready to learn and get better every day. Having my dad as an assistant coach, with his experience and knowledge, is priceless as well,” Kathie Layden said. Her father is former Taylor tennis coach Dave Wise. “He has really helped these girls gain confidence and improve their games.”

The culture of how to compete and train in practice has helped make up for lack of match experience.

“We try to work on match situations in practice for the girls and continue to drill basic shots every day,” Kathie Layden said. “Practices are very competitive and they push each other to get better, which we see carry over into matches.”

The Comets did return a lot of experience from two seasons ago but those players hadn’t experienced a lot of success. They were 7-18 in 2019 but this season they’re 12-5 overall, 6-4 in the Hoosier Heartland Conference and stand just outside the Class 2A top 10.

“I’m not entirely surprised,” said Eastern coach Erik Hisner, who took the reins of the program in 2020. “I really thought last year we’d have a squad that was much improved from 2019. I was disappointed when we weren’t able to play last spring.

Even though the 2020 spring season was shut down, many of Eastern’s players played summer ball in the 2020 and that led to improvements despite a missed high school campaign.

Hisner pointed to his players’ preseason winter work as a help as well. They got their full preseason in last year before the COVID shutdown and that helped a young team mature.

A key area of growth has been in pitching. Three of the Comets’ four primary pitchers — Owen Taylor, Cam Arcari and Levi Mavrick — are upperclassmen now, while the fourth, Corbin Snyder, is a freshman addition to an emerging staff. Snyder has the best ERA on the staff at 0.68 and leads the team in innings with 20.2, while Taylor is second in ERA at 0.95 and second in innings pitched at 14.2.

“The games we’ve pitched well we’ve had a chance to win,” he said. “Pitching’s our No. 1 [improved area]. I think we’re a solid offensive team, [but] I don’t think we’re a team that can go put up 10 or 12 runs on a consistent basis. From a pitching standpoint, we’ve improved a lot there. Defensively, we’ve got some talent, some athletes, that’s been a big plus as well.

“We do have enough talent offensively that we don’t have to be perfect on the mound or defensively, but we can put up five, six, seven runs and we can be good enough to get the job done.”

The Panthers had a pair of experienced players to build around in Eliza Lutgen and Emma Moore when the girls tennis season started, then quickly found they had five positions they could rely on. Western is 11-1 in duals this season.

“I knew we were going to be a good team this year, we had so many players that had put in work for the last two offseasons now,” Western coach Judson Quinn said. “I think we would have had a strong season last year as well, especially led by that junior class with Sydney [Jansen], Eliza and Chloe [Schmidt]. It’s just how much they’ve played over the summers and winters. It’s not too much of a surprise that they’re having as much as they are.

“I did not anticipate being 11-1 however. That’s been awesome.”

The Panthers are getting a lot of wins from singles players Lutgen, Schmidt and Macie Lockwood, and the doubles tandem of Jansen and Moore, and the duo of Elizabeth Mercer and Sophia Moreno.

“In tennis you can get away with winning with three good players, you just need to win three points,” Quinn said. “What makes our squad so strong is we have seven girls that can contribute to winning every single match.”

Quinn pointed to a key area of improvement.

“Definitely I would say mental game,” he said. “The girls have more confidence in themselves and I think that comes from a lot of reps. If you practice a lot of serves, then you’re going to have confidence to go out on match day. We don’t make a lot of mistakes. We don’t shoot ourselves in the foot often.”

Western will look to unseat Northwestern in the Kokomo Sectional later this month. The Panthers have never won a sectional title.

The Wildkat boys have shot their way up the local leaderboard with consistently good scores across the board. The Kats are creeping lower, with their best score so far being a 150 at the Kokomo Country Club on Monday. What’s more their worst score, 172 on Wednesday, wasn’t all that big a number.

“I knew we had the scores in us honestly,” said first-year coach Matt York. “I knew the caliber of the kids. Two of the top kids take private lessons at places so I knew they’d hit the ball pretty well. Honestly, I had no idea about Jackson [Richards]. The first day I saw him swing I thought, ‘Oh, this guy could be good.’

“One of our first meets he shot 37. I’m really surprised with his progress because I had no idea what he was capable of. I thought ‘Dude, you’re a basketball player.’”

Richards golfed as a freshman, then took his sophomore season off to concentrate on basketball. He, Karson Parrott, Ty Lauderbaugh and Hansen have bunched their scores well and that’s led to good team scores. York pointed to a sub-standard round where every Kat was still below 50.

“When I’m looking at the scores throughout the state, there’s obviously some elite teams, but a lot of teams don’t have that [every score below 50],” York said of Kokomo’s depth of scoring. “It’s good for me to see that someone like Jon Callane, who’s never really played golf, shot 44 this week.”

York said the key has been the Wildkats enjoy practicing, playing, and enjoy time together.

“We have a pretty tight bond,” he said. “The kids enjoy, even a day like [Thursday’s rainout]. Tipton was supposed to come down and they were bummed [the meet was called off]. The five guys get along really well. I never have to worry about the kids not working out. That’s great to see the kids treat practice as something they want to do, not that they have to do.”

Western and Peru have dominated the Peru Sectional in recent years, but Kokomo is looking like this year’s favorite. The Kats’ last sectional title was in 2001.

A player making a big move on the individual front is Blue Devil senior Courtney Rich. She played doubles in 2019 and has been a revelation at No. 1 singles this season.

Rich is now 10-0 after a three-set victory over a Lafayette Central Catholic opponent in the opening round of Hoosier Conference Tournament action on Wednesday. Prior to that match, the Huntington University recruit had dropped just five games total in her nine straight-set victories on the season.