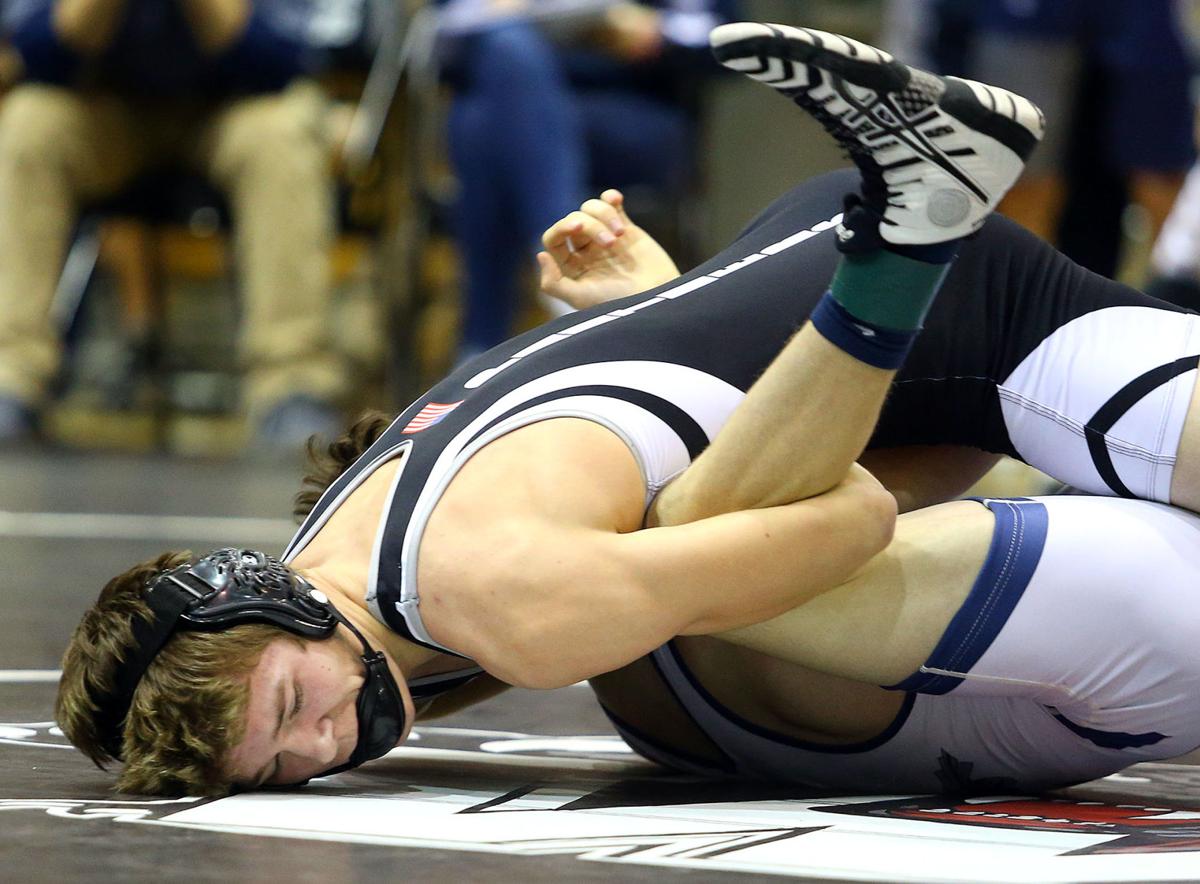 Western’s Hunter Cottingham, top, works against a Lafayette Central Catholic wrestler last season. Cottingham is back for his senior season of wrestling after reaching the state finals his first three years. 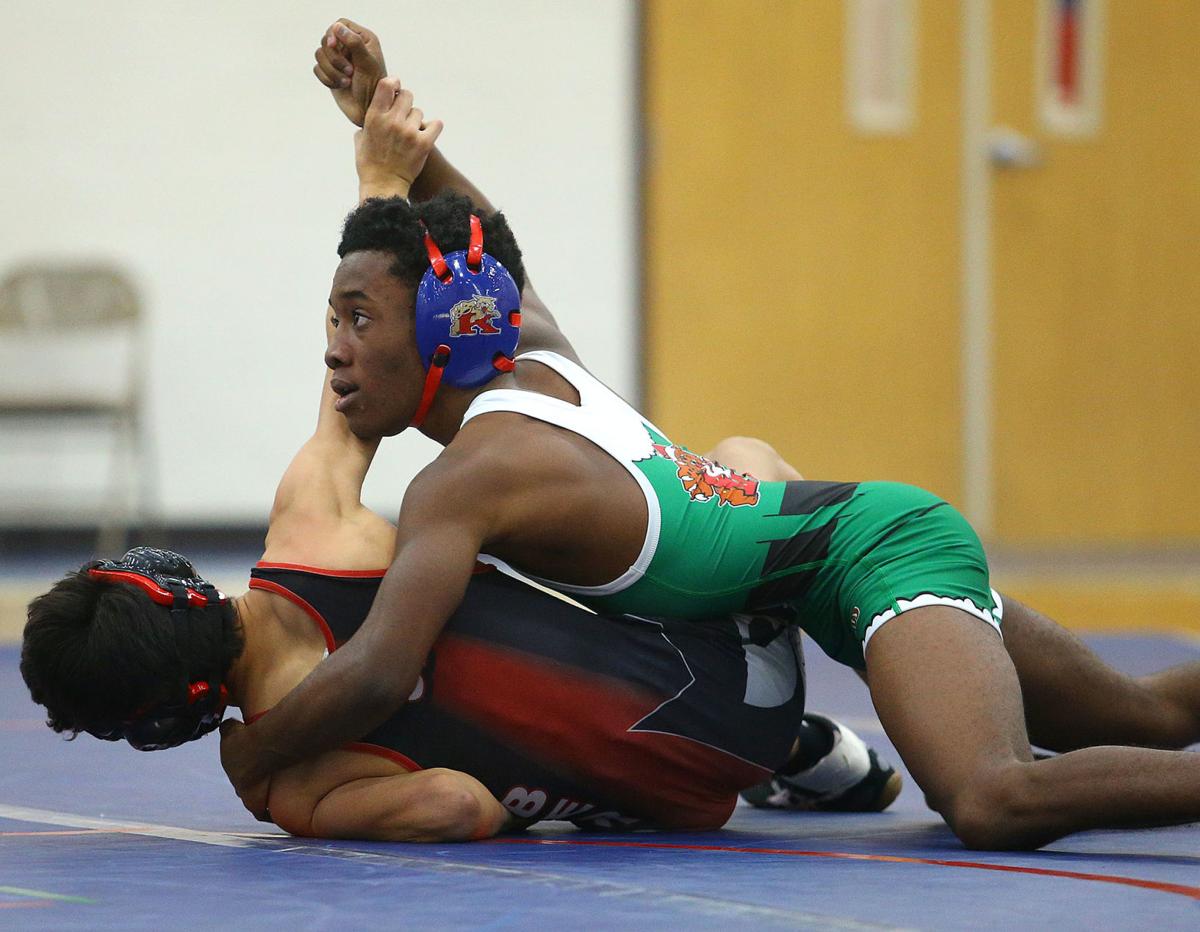 Western’s Hunter Cottingham, top, works against a Lafayette Central Catholic wrestler last season. Cottingham is back for his senior season of wrestling after reaching the state finals his first three years.

Western’s wrestling team experienced a lot of highs last season. The Panthers won the Class 2A title in the IHSWCA State Duals in January, then sent a big contingent to the semistate in Fort Wayne in February and three Panthers made it to the individual state meet in Indianapolis.

Now, with a strong core returning to the mat including state qualifiers Hayden Shepherd and Hunter Cottingham, the Class 2A No. 1-ranked Panthers lead the Howard County schools back into the new season.

“We’ve got nine guys back. All the guys are back from last year, they were there when we won the state duals title, so big matches shouldn’t bother us a whole lot,” he said. “We’ve got a lot of experience. Even though we’re a pretty young team — only like four seniors on the team — we’ve got some pretty solid kids.”

Junior Anthony Martin has the inside position at 106 pounds with freshman Graham Berry a possibility to split time. The 113 spot is up for grabs as freshmen Gabriel Bumgardner, Robert Dinn, Aiden Raab and junior Justin Brantley contesting the spot. Junior A.J. Belt is at 120 with Raab another option there. Senior Chandler Ciscell is at 126.

Cottingham, a three-time state qualifier, is at 132 and sophomore Hayden Shepherd is at 138. Junior Jackson Hartsough is at 145 with freshman Landon Smith backing him up. Junior Jaedon Smith and sophomore Brayden Shoaff are at 152 and one of those two will likely man the 160 spot. Freshman Christian White is another option at 160.

Junior Jerry Padgett is at 170. Senior A.J. Swing and freshmen Wade Ryan and M.J. Norman are contesting the 182 spot and one will likely move up to take the 195 spot. Junior Braydon Erb is at 220 with sophomore Alec Judeika and freshman Landon Hale as options there. Senior Blake Banter is at 285.

Padgett and Brantley reached the semistate ticket round last season while Martin and Ciscell also made it to the semistate. Erb won the sectional but saw his season end before the regional due to an injury.

The Panther coach has been comparing and contrasting this year’s team with last year’s. He thinks this season’s team should be even better in tournament formats, but isn’t sure if it’ll be as strong as duals until he sees them in action.

“There’s a lot of potential there,” Chad Shepherd said. “We’re going to be really solid in the lower weights. And then we need a couple of juniors in the middle to step up. They’ve put their time in, they should be ready, and then you’ve got Erb anchoring the upper weights, Erb and Jerry Padgett. We should be pretty solid.”

Western opens on Wednesday in a dual against Northwestern.

Former Comet wrestler Zack Pence takes over after veteran coach Bob Jarrett stepped aside. The 2006 Eastern grad worked under Jarrett as an assistant last season and with the middle school program for the last four years. He takes over with a specific style in mind.

Pence takes over a squad that returns six wrestlers that reached the regional or beyond last season.

“I’m excited,” he said. “We’ve got a really, really good core of kids that have been in the program for a long time, and then on the flip side of that we’ve also got some brand-new kids that have never been on the mat that will be in the lineup. I’ve got really high expectations for the kids who have been in the program for a handful of them, but individually as a team we’re starting behind the 8-ball. Every match we’re giving up two forfeits.

Junior Caleb Melton has the 106-pound spot. Freshmen Eli Ferguson and Austin Lucas are contesting the 113 spot. Senior Ethan Duchateau is at 120. Freshmen Caiden Kendall and Gabe Monize are at 126. Sophomore Bradie Porter is at 132. Junior Luke Hetzner is at 138. Junior Tallan Morrisett is at 145.

“Those are the guys that I need pins from,” Pence said.

Junior Bryce Buckley qualified for state last season but is out for the season after suffering an injury in the football campaign.

Ranked No. 7 in Class A, Eastern is scheduled to compete in the team state duals this season and Pence hopes for a good showing. But his chief focus is getting kids ready for the tournament.

“We’ve got several ticket-round guys that are returning from last year that are hoping to crack into the state finals and a couple of them are expecting to be placers,” Pence said. “My big expectations are more on the individual side than the team.”

Eastern defeated Elwood on Tuesday to open the season and next wrestles at Kokomo on Wednesday.

Kokomo has an experienced contingent of 32 wrestlers, and hopes to see that pay dividends this season.

“If I had to words to describe this team it would be ‘depth’ and ‘quality,’” Kokomo coach Mike Miller said. “The other day we asked the team ‘if you’ve never wrestled before raise your hand’ and only one kid raised his hand. We’ve got a big freshman group this year and a lot of those guys have grown up wrestling in our club so we’re excited about where we’re going.”

While Kokomo has only three seniors, a dozen of the returning Wildkats saw mat time last season. That leads to higher expectations this season.

“We’ve been on a steady progression,” Miller said. “My first year as head coach we were, I think, 14-17 as a squad for the season. Last year we made a step forward to 25-6 as a team. This year we’re looking to make another step forward. What we’re really looking for is to see if we can get more guys moving up in the sectional placing, moving up in the regional placing … and then wrestling [in the semistate] for that opportunity to get down to the big tournament.”

The Kats have a lot of competition for spots.

Junior Taylor Duncan, sophomore Trey Marciniak, and freshmen Jaquan East and Brady Stump are in the mix at 145-152. Seniors Mitchell Wyrick, Ethan Marciniak and Nick Moore, junior Myles Lenoir, and sophomores Kymani Howard and Linken Brock will man the 160, 170 and 182-pound spots. It’s possible one of those six will also fill the 195 spot.

Barr and Conner reached the semistate last season with Barr making it to the ticket round. Corrales, Howard and Wyrick were regional qualifiers.

Additionally, Miller is enthused that Kokomo has four girls on the squad — Davis, Amaya Bowen (106), Kamryn Boone and Mea Hauser (both 120-126). All four are freshmen who have wrestled in Kokomo’s youth program. In addition to Kokomo’s regular meets, they’ll have the opportunity to wrestle in some female-only tournaments, and Kokomo is hosting the girls state finals this season.

Kokomo opened its season Monday with a victory over Northwestern and next hosts Eastern on Wednesday.

“We’re just excited to get this thing going,” Miller said. “It’s one of those things where we were very impatient to have the offseason go by quickly so we can get back in and see what these wrestlers can get accomplished.”

The Tigers return the bulk of their squad and expect to make progress as a result. Northwestern graduated two seniors off the squad.

“The biggest thing is we’ve got a lot of kids that will be in our lineup with mat time,” NW coach Steve Swinson said. “They’ve kind of taken their lumps the last two years and now our really good leadership group is our junior class. We’ve got nine of them and most of them will be in our lineup.

“The other thing for us is the maturity level from being sophomores last year to this year’s juniors. The maturity and leadership is much better.”

Swinson said this year’s Tigers are an athletic bunch. At 106 pounds is freshman Isaac Bumgardner. Freshman Tiquan Howell is at 113. New senior Andy Xolo-Ixba is at 120. Sophomore Silas Phillips is at 126. Junior Blayne Leeman has inside position for the 132 spot with junior Tommy Lunsford pushing for time. Another option is freshman Jansen Slate. Junior Marcos Castorena and freshman Braden Hershberger are at 138.

Junior Bodey Henry is at 145. Senior Kevin Badgley, the only four-year Tiger, is at 152. Sophomore Garrett Myers is at 160. Junior Nolan Floyd is at 170. Freshman Cole Cardwell was injured in football season and may factor in at 170 later in the season if he recovers in time. Junior Kyle Cardwell is at 182. Junior Christian Stout is at 195. Sophomore Julion Creason is at 220. And sophomore Christian Allen is backup at 220 and otherwise mans the 285 spot.

Backups include junior Cesar Xolo-Ixba at 132, junior Caden Taylor at 132 or 138, and freshman Charlie Houlahan at 285.

Kyle Cardwell and Creason both reached the regional last season.

“We’ve got a good mix of kids and really like the kids we have in the room with us,” Swinson said. “They feel it’s their time and are working hard to turn the corner.”

Northwestern fell to Kokomo to start the season on Monday.

New coach Kyle Murphy returns to the program to take over as coach after a season coaching the Decatur Central middle school program and assisting the varsity. The three seasons prior to that he was an assistant with Taylor.

The Titans have battled low numbers for several seasons and won’t fill all weights, but have an influx of more wrestlers this season.

Murphy said he’s taking over the program “from almost nothing, but at the same time I’m happy I get to develop the program in the direction I want to see. I can make sure we’re all on one page as an organization whether it be high school, middle school or the youth club I want to develop. But at the same time, it’s taking some time to develop it the way I want to. I think we’re off to a good start. I’m seeing the team come together, I’m seeing leaders step forward and show themselves as leaders.”

An emphasis is hand fighting.

“Find our angles, then take our shots and try to control our opponents,” Murphy said. “And then we’re working on making sure that we’re passionate at working on bottom. If we can work on escapes and our reversals off bottom, we should be fine.”

The Titans will forfeit five weight classes initially. Freshman Max Campbell is at 120. Freshman Josh Parker is at 138. Senior James Lambert is at 145 with freshman Jonathon Doty backing him up. Sophomore Jack Bogue is at 152.

Freshman Alexandria Collins and senior Tyler Pyle are at 160. Senior Zevion Ezell is at 170. Junior Josh Doty is at 182. Senior Ethan Partlow is at 195. Freshman Johnathon McKoon is at 285.

Murphy said he wants to help Taylor “make an impact” on the local wrestling scene again. “I want to make sure that any time [opponents] see Taylor on their schedule they’re going to be in a battle, and then we’ll work on the tournament series.”

Taylor opened the season with its super 8 last Saturday.

Pedro Velazco has been a sportswriter at the Kokomo Tribune since 1999.